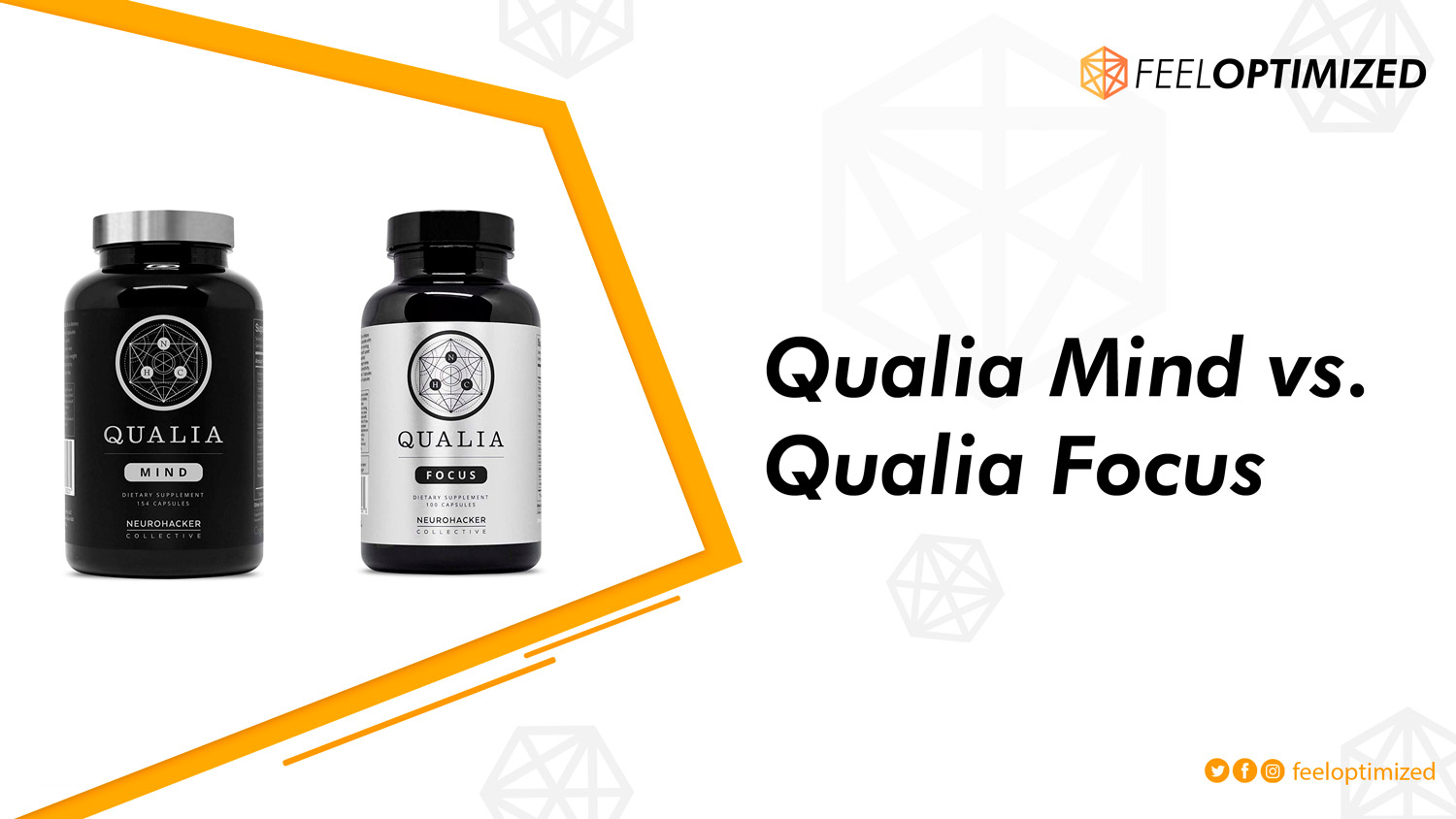 Both Qualia Focus and Qualia Mind are popular nootropic stacks. And in case you didn’t know, they both come from Neurohacker Collective.

Qualia Mind and Qualia Focus are derived from the original Qualia Stack and are respectively popular between nootropics enthusiasts. But which one is better? And how can you differentiate between the two? That’s precisely what we are going to explore today.

As we’ve already mentioned, both products are manufactured by Neurohacker Collective, a well-known brand in the world of nootropics. Qualia Mind is the older among the two and had already garnered a sizable following when Focus hit the market.

However, it wasn’t long before Qualia Focus became just as popular as its predecessor. With both stacks packing quite a lot of nootropic power, there’s bound to be confusion regarding which one is better.

That’s why we decided to go ahead and compare the two so potential users would be able to see the benefits of each product. After a cursory comparison of the two, it’s evident that both Qualia Mind and Focus consist of several nootropic ingredients that work to boost brain health. The ingredients in both formulations are all-natural, which means there’s minimal risk of adverse side effects.

Qualia Mind is a collection of 28 premium nutrients and nootropics designed to boost the body’s self-regulation system. Through this, the supplement helps to boost short-term as well as long-term cognitive capability.

Similarly, Qualia Focus is a stack of 24 nutrients that helps more with the short-term cognitive effects according to Neurohacker Collective. Focus also boosts neurogenesis, thereby strengthening neural connections. In other words, it works to enhance cognitive performance and improve mental health.

Yet, there are significant differences between the two, starting with the pricing. Qualia Mind is almost twice as expensive as its counterpart. This begs the question, why the vast difference in pricing?

What Are The Similarities?

When we compared the ingredient lists of both the supplements, we were surprised to find that they share 24 common ingredients! This is to be expected, though, as both are derivatives of the original Qualia Stack.

The following are the components that Qualia Mind and Focus have in common:

From the above list, it’s evident that both the formulations are well formulated for nootropic and cognitive benefits. It’s no wonder that both products are loved in the biohacking and life hacking communities. But similar doesn’t mean the same, and we soon discovered that the prime differentiator between the two is in the extra ingredients that Qualia Mind boasts of.

While most of the ingredients in both the products are the same, Qualia Mind has four extra components. And it’s these four that make differentiate this product when compared to Qualia Focus. In this section, we’re going to take a look at these additional ingredients in detail.

Citicoline is a precursor to acetylcholine, which is an essential neurotransmitter. This ingredient is vital in boosting phosphatidylcholine levels, improving brain energy, and repairing damage to neural tissue.

Another advantage of Citicoline is that it may increase cognitive enhancement abilities exceptionally due to having a cytidine component. As Qualia Mind contains 150mg of this ingredient, its ability to strengthen your cognitive performance is enhanced significantly compared to Qualia Focus.

This is a vital phospholipid that’s crucial for the proper formation of the brain’s cell membrane. It also plays a significant role in intercell communication and helps repair neurons. Apart from the above, Phosphatidylserine helps to alleviate the effects of cognitive decline and promotes enhanced cellular function. Qualia Mind contains 100mg of this ingredient.

DHA is a prominent and essential fatty acid that’s commonly found in fish oil. Together with the above two ingredients, DHA helps to improve general cognitive power as well as mental health. It also works to fast-track neural regeneration and boost long-term decision making.

It’s estimated that a person needs approximately 100mg of DHA daily for elevated cognitive functionality. Qualia Mind contains 80mg of this particular ingredient to help you reach the optimal daily intake of DHA.

PQQ works by boosting ATP production at the mitochondrial level; in simpler terms, it helps to enhance the brain’s energy levels, thereby allowing it to work with greater efficacy. Plus, it doesn’t have any of the side effects that are usually associated with performance boosters and stimulants such as caffeine.

This allows it to have long-term effects without any detrimental side effects. Since PQQ intake is dependent on the person’s weight, Qualia Mind contains only 10mg of the ingredient. This, we think, is a safe level for everyone.

Apart from the above four ingredients, Qualia Mind also has some ingredients in higher amounts than Focus. For example, Qualia Focus contains only 150mg of Rhodiola Rosea and Acetyl-L-Carnitine, whereas Mind contains 300mg of each per serving.

The same can be seen with Artichoke Extract and Uridine-5-Monophosphate Disodium. While Qualia Mind contains 500mg and 250mg of the ingredients respectively, Focus only packs 300mg and 200mg per serving.

From the above comparison, it’s evident that Qualia Mind is the more potent of the two, with better ingredient concentrations. Plus, its extra components pack a real punch that helps to boost the brain’s abilities in the long as well as in the short run.

Comparing The Effects of Qualia Mind And Focus

When it comes to efficacy, both Qualia Mind and Focus perform admirably. Qualia Focus is the perfect recipe for boosting mental focus and motivation. Plus, it begins working within 30 minutes of consumption, which means you won’t have to face any delayed effects.

With Qualia Mind, you get all the above benefits, but its effects are more long-term (more on that in the next section). With Qualia Mind, a person’s entire cognitive faculties get a leg-up, allowing your thought processes to be more fluid and cohesive.

Also, since the Qualia Mind formulation is way more potent, the effects last longer than with Qualia Focus. In short, Qualia Mind does everything that Qualia Focus does; but it has additional benefits due to the extra ingredients, and the efficacy levels are visibly higher.

When it comes to the question of long-term benefits, Qualia Mind is the clear winner. Qualia Focus helps to provide the user with immediate focus, better moods, and greater mental clarity.

However, due to the relatively lower concentrations of some major ingredients, the Focus formulation is best when taken for the short-term. If you want to reap the long-term benefits of a complete nootropic, then it’s Qualia Mind that you’ll want to incorporate into your routine.

Qualia Mind contains all the ingredients of Qualia Focus and hence provides all of its short-term effects. What’s more, due to the presence of the four additional ingredients as discussed above, the Mind formula also may facilitate long-term brain repair and neural regeneration.

Along with that, Qualia Mind contains PQQ, which helps to boost energy at a cellular level. Together with DHA, Phosphatidylserine, and Citicoline, the formulation works together to promote long-term energy boosts and helps to slow down cognitive decline.

Considering the above, the choice is clear: if you’re looking for short-term, immediate boosts, Qualia Focus is your best bet. However, for long-term, sustainable effects, nothing beats the Qualia Mind Formulation.

From the above, it’s evident that the difference in pricing between the two components is justified. Qualia Focus is the less expensive of the two, with a 100-capsule bottle costing only $69. Considering a dosage of 5 capsules per day, a bottle will last for 20 days.

Compared to that, Qualia Mind gives you 154 capsules for $139. At double the price, you get 22 servings of 7 capsules per day. There’s no denying that Mind is the better alternative, but it’s also pretty expensive and might not be affordable for everyone.

The verdict is clear: Qualia Mind is, without a doubt, the more effective of the two. With a greater number of ingredients, higher potency, and long-term effects, this is the nootropic that takes the crown.

However, it’s also rather expensive; not everyone would be able to shell out top dollar for the stuff. In that case, Qualia Focus is an effective alternative. However, for best results, it’s recommended that you go with Qualia Mind; it’s certainly the winner here.