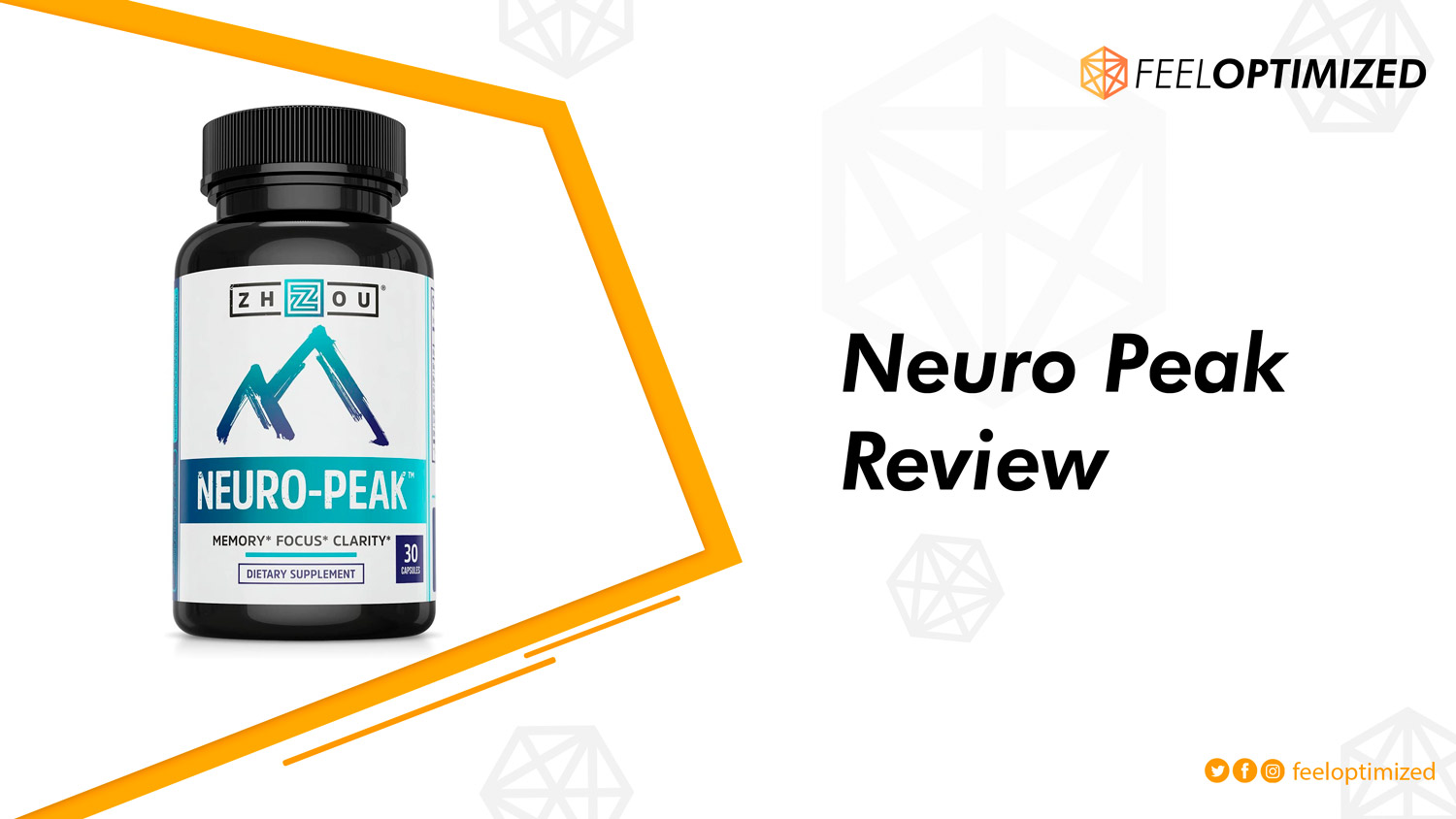 Are you taking Neuro Peak to boost your daily performance? Read through our detailed review of this nootropic before you purchase and make sure you’re making an informed decision.

In today’s world, everyone expects you to be performing at a high-level. So, it’s no wonder that nootropic supplements have increased in popularity within the last couple of years.

However, not all nootropic products have the same efficacy or deliver the right results. Take Neuro Peak, for example. It is a popular nootropic by Zhou Nutrition that has made a name for itself among customers.

But is it all that it lays claim to be? That’s what we’re going to find out in today’s review.

What Is Neuro Peak?

Neuro Peak is a brain enhancement supplement created by Zhou Nutrition, an above-average player in the nootropics market. The company has its labs in the US and is known for providing affordable nootropic solutions.

Neuro Peak is one of their popular products designed to provide users with greater mental clarity and better memory. It also claims to improve focus, minimize stress, increase your motivation, and help manage your mood, both in the short and long-term.

When it comes to nootropics, however, more ingredients don’t always translate to greater product efficacy. With this in mind, we decided to strip down Neuro Peak and look at the individual ingredients that make this product tick. 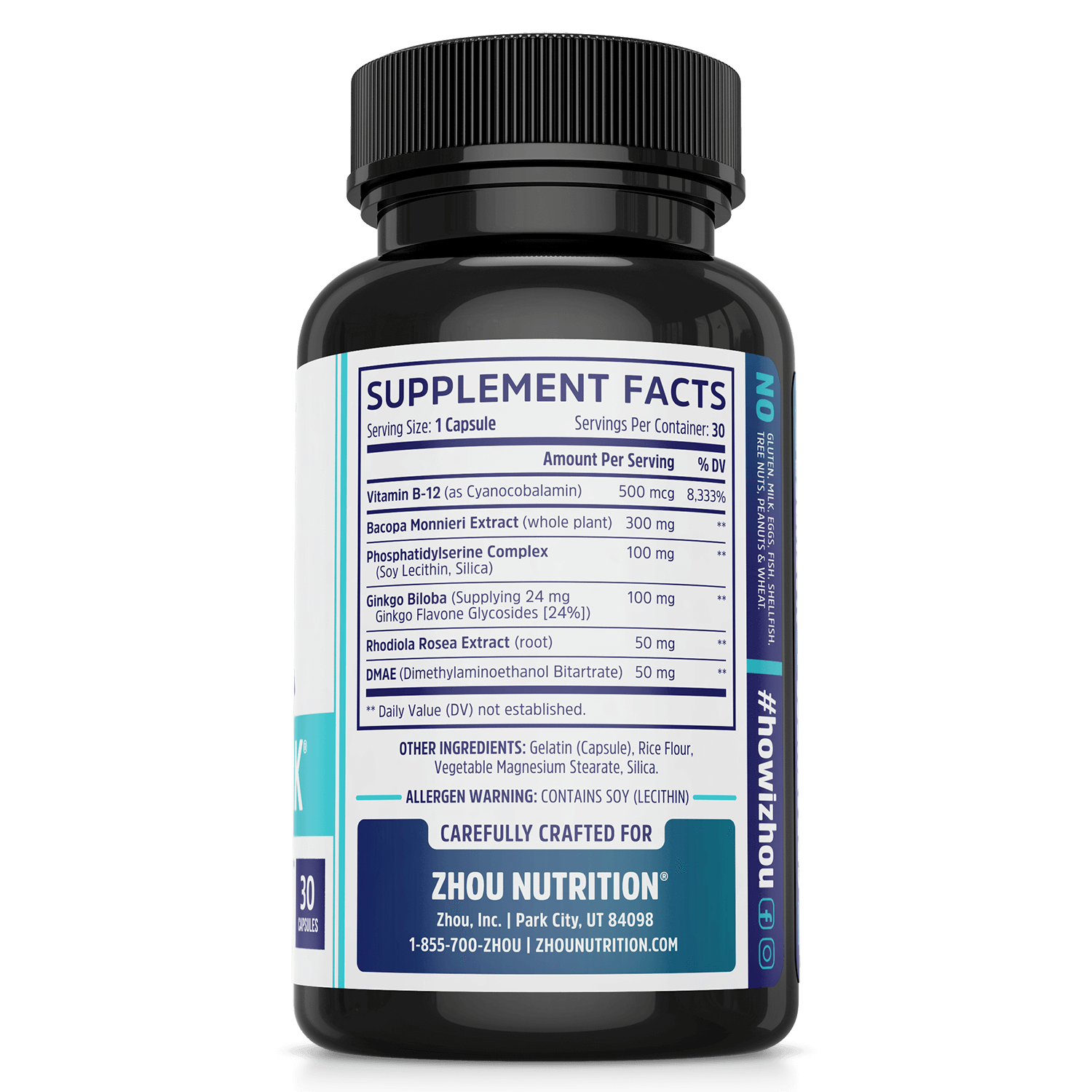 As we’ve already mentioned, Neuro Peak is a combination of six nootropic compounds that claim to work together and boost brain health. In this section, we analyze the ingredients individually and in detail to find out if they are genuinely all that they claim to be. We’ve listed the components as they are listed on the product label.

1. Vitamin B12 (As Cyanocobalamin)

Vitamin B12 is known to be one of the better nootropic ingredients around. Not only is it an essential nutrient for boosting brain function, it’s also necessary for normal operation of the body and the nervous system.

We were happy to see this as one of the major ingredients of the Neuro Peak capsule. However, when we analyzed the levels of the stuff, we were surprised to find 500mcg of it in every capsule. This is a bit too much, in our opinion.

Bacopa Monnieri is, without a doubt, a high-class nootropic that’s essential for improving long-term memory. Bacopa’s use has been shown to bring about significant improvements in core memory functions such as retention and recall.

An extract of the plant has had positive effects on patients with cognitive impairment, and also helps to reduce anxiety and stress levels. The trouble is, Neuro Peak doesn’t contain a potent extract of the plant, but the whole plant as an ingredient. This decreases the efficacy of the component to a large extent. To learn more about the proper extraction methods of Bacopa – check out our review of the best bacopa supplements.

This is a phospholipid that’s found in the human brain and plays a role in cognitive functioning. Chemically, it’s a lipid, i.e., a fatty acid insoluble in water and has been known to slow down the effects of cognitive decline.

Phosphatidylserine is a vital component of several neural structures, such as synaptic connections, neurons, and myelin sheaths. It’s also used for intercellular message transmission and for triggering apoptosis.

Phosphatidylserine is FDA approved and helps to remove toxins in the brain, which means that this is a component that can play a significant role in enhancing cognitive function.

Ginkgo Biloba is a well-known nootropic that improves the blood flow to the brain. This is due to the action of glycosides found in the compound that enhance vasodilation, leading to a boost in blood flow.

Gingko is also thought to be useful in increasing the amount of oxygen in the brain. Thus, it can be beneficial in the revival of brain cells deprived of oxygen. Overall, it’s considered a useful nootropic that improves cognitive function as a whole.

An anxiolytic compound, Rhodiola Rosea extract is excellent for reducing the effects of stress and anxiety. It helps calm down a person, both physically and mentally, thus allowing them to direct greater focus to whatever task they are performing.

Rhodiola does not have any harmful side effects and can be consumed by people of all ages. It’s safe, reliable, and has predictable action that helps to improve brain health and attention. However, Neuro Peak contains just 50mg of this ingredient, which is not sufficient for long term effects.

DMAE is thought to improve the synthesis of acetylcholine, which is an important neurotransmitter. However, it is not a reputed cholinergic and has unreliable effects in the synthesis of choline compounds in the brain. What’s more, it’s also known to cause several unwanted side effects such as muscle cramps, headaches, and brain fog.

After going through the entire ingredient list of Neuro Peak, we think you’ll agree with us when we say that we weren’t very impressed. True, the product does incorporate a few promising ingredients, but the quantities aren’t appropriate, and the results are unreliable at best. Still, we wanted to test out its effects in further detail.

We decided to try out Neuro Peak among our team members for a week, at the recommended dosage of one capsule per day. The preferred time we chose for the dose was early morning with breakfast and a glass of water.

After one week of use, the results were mixed at best. While most team members reported liking the product overall, they didn’t show any short term boosts in cognitive energy. Nor was there any evidence of enhanced performance in any mental tasks.

Plus, some team members even complained of mild headaches after taking the capsules. This might be a direct result of the DMAE, though we can’t be sure without further analysis.

Our consensus was that Neuro Peak lacks several essential ingredients when compared to other products in the market. Long story short, it is safe to say that its results are not anywhere close to what you’d expect from an optimal nootropic.

The recommended dosage of Neuro Peak is one capsule a day, and we suggest you stick to it. Take the medicine with breakfast in the morning, along with a glass of water. And by the way, do remember that it contains DMAE, so do not consume more than the recommended dosage. Otherwise, you might end up doing more harm than good.

Most of the ingredients in this product are safe for consumption and don’t have any adverse side effects. The majority of our team members did not experience any severe effects while taking it, and hopefully, neither will you.

However, as we’ve already mentioned, the DMAE content has us worried. And if our test experience is anything to go by, some of our team did experience headaches and brain fogs. These are known side effects of DMAE and take place immediately after taking the capsule.

In case you too feel unwell after taking Neuro Peak, don’t continue the medicine and consult your doctor as soon as possible.

Where Can I Buy Neuro Peak?

Neuro Peak can be bought from the official website of the company. We’ve also seen a few seller pages on Amazon, though we can’t speak for the genuineness of the product that you’d receive.

Is Neuro Peak Worth Buying?

It’s hard to say; while most people don’t report any positive effects from the product, many claim that it works to improve cognitive function. Going by our results, we suggest it’s best to stay away from this product.

Neuro Peak may be a good choice for those looking to try out a cheap nootropic just for the sake of it. But if you want serious results, we suggest skipping this nootropic all together. The Neuro Peak Formula is outdated, the ingredients are weak, and the efficacy is questionable.

There are far better alternatives in the market at the end of the day, and you’d do well to use any of them (check out our STAQ Performer Review and Qualia Focus Review). Zhou Nutrition really needs to revamp the formulation; otherwise, Neuro Peak may soon be headed for nootropic anonymity.

So, don’t waste time and money on this product, and seek help from other nootropics on the market.