MadMonq Review: Does This Nootropic For Gamers Work? 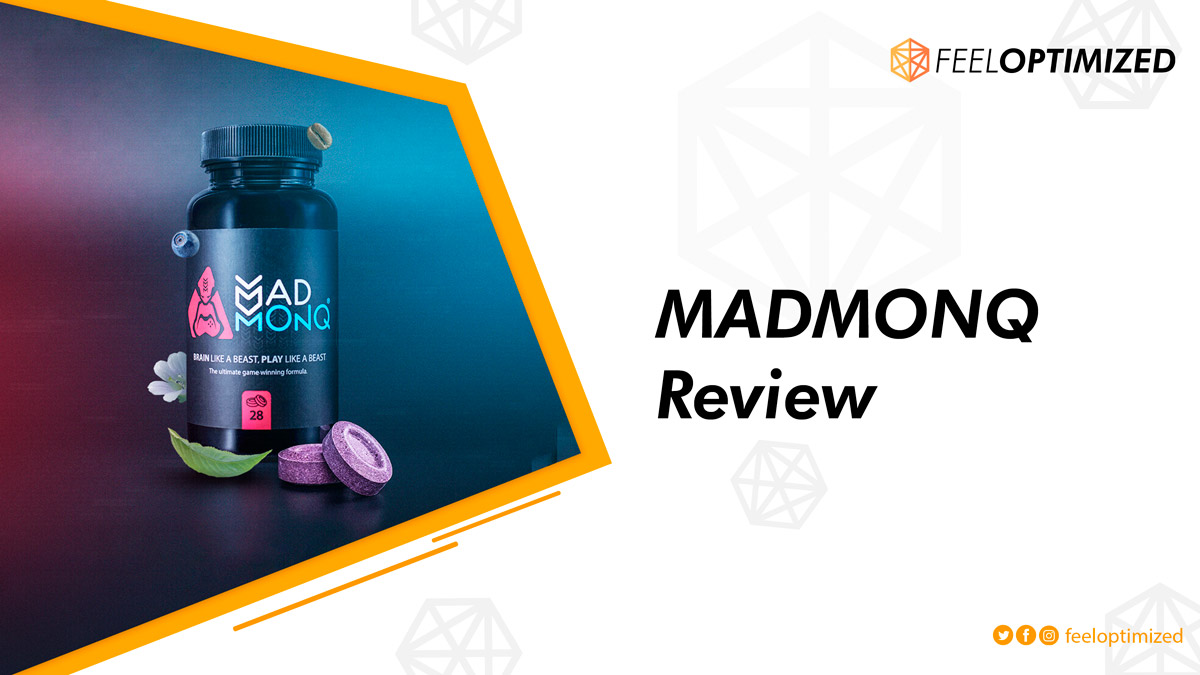 MADMONQ is a chewable supplement that claims to help you game better while improving your body in the process – but does it actually work? Read our review to find out.

Let’s face it: gaming is no child’s play. And with millions of dollars on the line, pro gamers are not ready to give anyone room.

Enter MadMonq, a one of a kind nootropic supplement that’s aimed specifically at gamers. But is this brain-booster all that it claims to be? That’s exactly what we’re going to explore in today’s comprehensive review of MadMonq.

The international eSports arena is growing larger by the day, and there’s no denying that it pays well. However, intense hours of gaming demand mental focus and precision of almost superhuman proportions.

That’s precisely where MadMonq comes in. Branded as the world’s first pill that focuses solely on gamers, this nootropic supplement aims to improve gaming performance and provide higher energy and reaction times.

MadMonq is a freshly minted European startup that has its roots in the Czech Republic. The founder, Michal, a pro gamer himself, works with the vision of supplying a supplement that provides the mental and physical boost gamers need.

Apart from the claims it makes, we were also pretty impressed by the well-designed, RGB themed packaging. The pills themselves are of a purplish hue and are chewable, which makes them easy to take before getting into the action.

Naturally, a supplement that makes such lofty claims needs to be investigated further. And we set out to do precisely that.

For any gamer worth their salt, an augmented mental and physical performance is a boon. And MadMonq’s nootropic stack promises to do that, and more. The supplement works to improve reaction times and brings greater focus to your gaming performance.

Apart from the short term benefits, MadMonq also works behind the scenes to improve cognitive abilities, reduces errors during gameplay, and promises to give better stress control. What’s more, it even provides you with elevated stamina to perform.

Finally, with MadMonq, you can also expect higher levels of concentration, reduced anxiety, and sharper mental control. In short, the supplement aims to provide gamers with all the necessary qualities for achieving eSports excellence.

But what makes the pill such a potent power-up? We undertook an ingredient level analysis of the stuff, and this is what the results revealed. 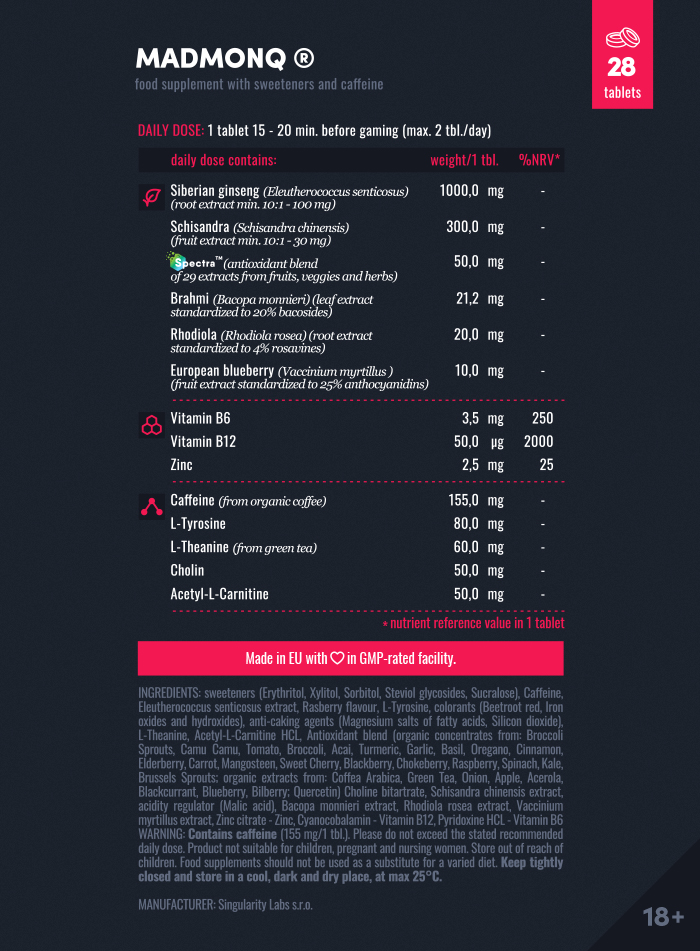 The MadMonq formula is a blend of fourteen nutrient-dense nootropics that help improve focus, reaction times, and hand-eye coordination. It also contains a super blend of twenty-nine natural extracts that ensure gamers can deliver their peak performance every time.

The following is a complete list of MadMonq’s constituents:

Looking at MadMonq’s stack, we found that it includes components that are standard for most nootropic stacks in the market. However, it’s got a potent blend of exotic fruits and herbs, along with several well-known nootropics that are proven cognitive performance boosters. The following is a detailed review of some of the significant ingredients of MadMonq.

One of the world’s best-known adaptogens, Siberian Ginseng root is known for providing increased resistance to stress. It also helps to regulate blood pressure, thus keeping the heart in good condition.

Research on the effects of Siberian Ginseng in providing enhanced mental performance is not widespread. However, it’s generally accepted that when Siberian Ginseng is combined with Rhodiola and Schisandra (all of which are present in MadMonq), it improves mental speed and response times.

Caffeine, which is one of the major constituents of MadMonq, is widely known as an effective stimulant that helps boost attention levels and enhance alertness.

Finally, we must mention L-Theanine, which is commonly paired with caffeine to reduce the anxiousness and jittery side effects of caffeine. The L-Theanine and caffeine combination can be seen in several popular nootropics such as STAQ Performer and Qualia Focus.

Our Experience With MadMonq

To test the supplement’s benefits, we decided to let the gamers on our team try it out. Among the 10 people who volunteered, half were given placebos, while the rest were provided with the real MadMonq pill.

We then pitted the two teams (5 people each) against each other in a round of League of Legends and observed the results. The team that used MadMonq was definitely in a better mood to play. They were more focused, agile, and ready to take on the other side with renewed vigor.

We also measured the reaction times of the two teams, and the players taking MadMonq had a visible edge over the others. Even after two hours of gameplay, the team showed no signs of energy lag or mental stress.

Deciding to push the limits, we gave the test team two MadMonq capsules per player for the next round of experiments. This time also, the results were in favor of the MadMonq team. However, some players did complain of a bit of edginess, with a few outliers even reporting elevated heart rates.

Overall, we think MadMonq is an excellent game-performance enhancer. And provided you stick to the recommended dosage of one capsule a day, you’ll not face any significant problems.

Going by our experience with it, we think it’s best to stick to the recommended dosage of one pill per day. And even if you do decide to brave it and take two, remember to space them out by at least six hours.

This way, you’ll get all the benefits and be able to minimize the side-effects. And yes, the pills take about thirty minutes to kick in, which means you’ll get ample time to prepare for your game.

We tested MadMonq over three weeks (our usual test timings) and found no significant side effects when the test group took one tablet a day. However, taking two pills together had some players in jitters. This was probably due to the excess caffeine intake from two pills.

Overall, we can safely say that if you’re a pro-gamer or even an amateur who wants to make it to the big leagues, there’s no better product on the market than MadMonq.

It’s safe, contains pure ingredients, and has no side-effects when you stick to the recommended dosage. Plus, apart from enhanced gaming performance, the pills also work to improve your mood.

So, don’t sit around waiting anymore. Just get your dose of MadMonq and game on!