Herberall Review: Is It Worth Trying? 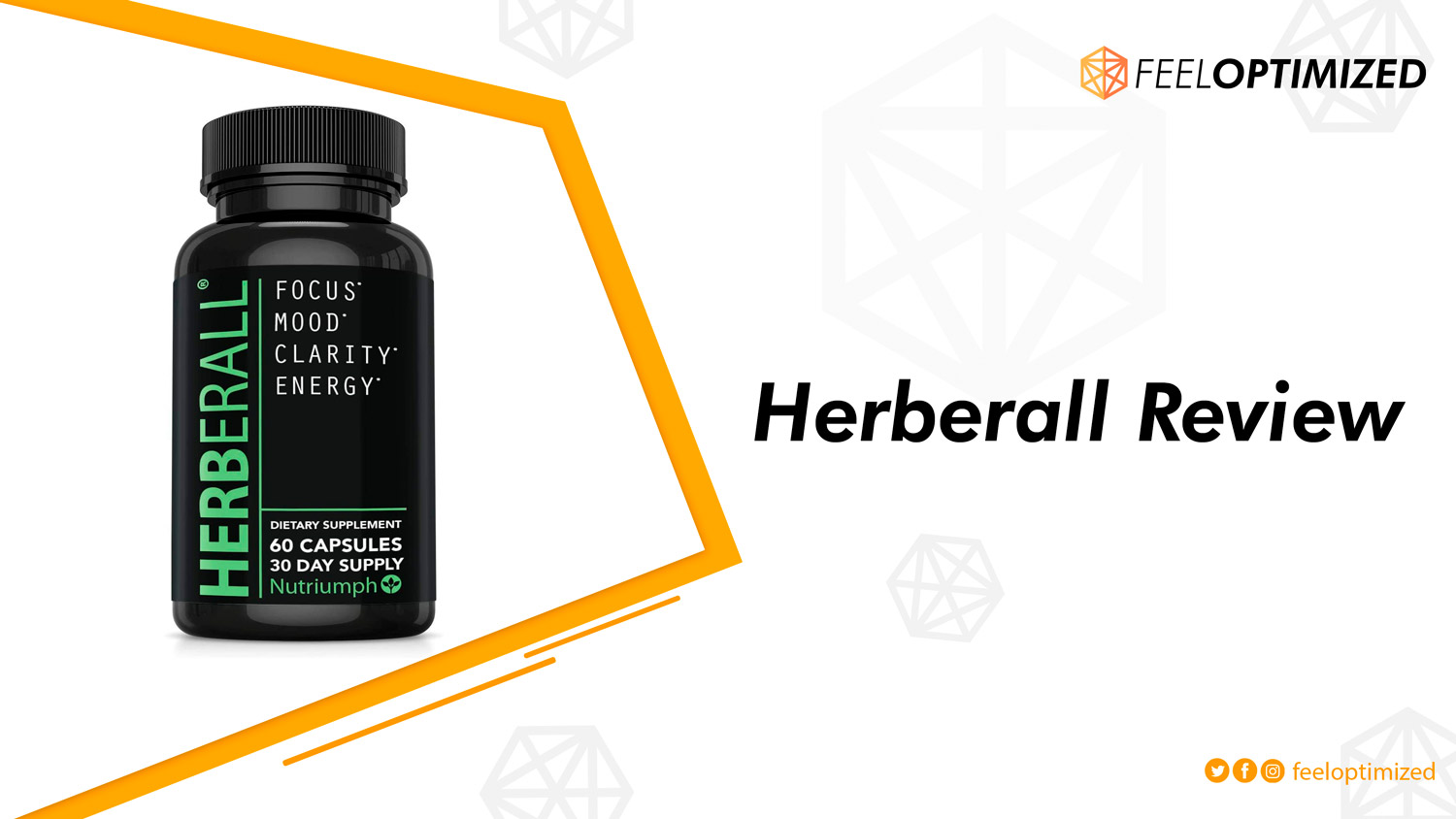 Herberall is a nootropic supplement that claims to improve your memory and concentration, boost focus, enhance clarity, and lift your mood. But does it do all that it claims? We tested the product to find out. Read our review to see what we found out.

Today’s fast-paced world requires us to be on the top of our game all the time, both physically and mentally. However, there’s no denying that constantly performing at a high level sometimes takes a toll on your cognitive abilities. Thankfully, nootropics have risen in popularity over the last couple of years to help combat brain fatigue and help you perform better.

That being said, let’s find out if the popular Herberall supplement can do any good.

Herberall is an over-the-counter nootropic pill that helps you achieve optimal brain function and increase your mental capacity. Other than that, it also helps boost energy, improve clarity and enhance the mood for users.

One of the highlights of the product is its use of 100% natural ingredients. Nutriumph Supplements, which is the company behind the product, believes in the ability of natural resources to improve performance. This is the reason why Herberall is free from chemicals and works in a way that assists your body’s natural healing mechanisms.

Not only is the supplement vegan-friendly and gluten-free, but it also claims to have zero side-effects like jitters and breakdowns. And if that wasn’t good enough, this sugar-free formula doesn’t add to your fat intake. Moreover, its natural caffeine content aims to improve attentiveness and accuracy at work.

Its production has been approved by the FDA, and all its ingredients are certified by the USDA.

Herberall is made from a blend of 12 nootropic ingredients and 4 vitamins. Since it uses a proprietary formula, there’s no way we can determine the exact quantity of each element.

Now, let’s take a deeper look into the benefits of some of its major ingredients.

Also known as Deanol, this is one of the most common ingredients found in nootropics. The natural compound mainly helps in enhancing the production of acetylcholine, which is a neurotransmitter responsible for memory and learning power.

Besides, its antioxidant properties prevent the build-up of beta-amyloid that causes aging in brain cells and cognitive decline.

Panax ginseng is an age-old nootropic plant that is used in making traditional medicines. Its root contains various active substances that calm the nerves to fight anxiety. Moreover, it also helps in improving cognitive function and motivation.

Huperzine A is a plant-based chemical that acts as an inhibitor for acetylcholine. Put simply, this naturally occurring chemical reduces the level of acetylcholine, which can cause a block in the nervous system. By suppressing its effects, Huperzine A prevents the brain from developing neurodegenerative diseases like Alzheimer’s.

Furthermore, it can also help in the revival of cognitive functions, especially after severe brain injuries.

Ashwagandha is an evergreen shrub that is well-known for its use as an adaptogen in Ayurvedic and ancient Chinese medicine. Besides countering the effects of stress, the ingredient also improves memory, promotes cognition, and reduces the symptoms of depression.

Bacopa Monnieri, also called Brahmi, is a perennial creeping herb that helps to combat mood disorders, memory decline and Alzheimer’s. Check out some of our favorite bacopa supplements here.

D-Ribose is a naturally occurring sugar compound that is formed in the human body. Its more concentrated and potent form may increase physical prowess by reducing fatigue to increase muscle energy that lasts up to 8 hours. Apart from that, it may also act as a mood-enhancer.

Adenosine 5’ Triphosphate or ATP is an organic chemical that breaks down calories and produces energy to power the functions of living cells. It’s used to reinforce the overall effectiveness of the supplement.

L-Theanine is a nonessential amino acid that’s found in tea leaves. Not only does it relax the brain, but it also gets rid of anxiety and stress-related issues, without causing fatigue or drowsiness.

Besides, L-Theanine improves the ability to switch attention between different tasks. When included in sufficient amounts, the compound is useful in suppressing the harmful effects of caffeine. Additionally, it may also aid memory and enhanced learning abilities in individuals.

L-Theanine is a common ingredient found in many popular nootropics like STAQ Performer, Qualia Focus, and Genius Joy.

Caffeine is well-known for its effectiveness in keeping the brain alert and preventing drowsiness. The dehydrated form of natural caffeine in Herberall is contributed by the mix of Yerba Mate, Caffeine Anhydrous and Guarana Seed Extract. Out of these, Yerba Mate is also believed to have fat-burning abilities.

The exact amount of caffeine in Herberall is 261 mg per serving (2 pills).

Besides enhancing bone health, Vitamin D is also known for its neuroprotective properties, which prevent diseases like Alzheimer’s and Dementia.

The combination of these essential vitamins promotes blood heath and proper brain development. In addition, they also prevent the nerves from premature damage, aid the immune system and help in the growth of healthy blood cells.

Herberall also contains some other vitamins and nutrients.

After taking the first serving in the morning, most of our team members reported a quick boost in energy, in as little as 45 minutes. We could see significant improvement in their focus and accuracy.

This doesn’t come as a surprise, considering the whopping amount of caffeine per recommended dose. To give you a better idea, two pills have more than twice the caffeine content that you’d get from drinking one cup of coffee. Luckily, none of our co-workers who tried Herberall had caffeine-related allergies. Furthermore, none of them reported any instance of jitters or crashes during the day.

Our biggest takeaway was the fact that apart from the sudden burst in energy, none of our members experienced any improvement in memory. Sure, they could get more work done than average, but it didn’t necessarily mean better cognition and mood, at least not instantly.

So, it is safe to conclude that despite having a plethora of memory and cognition improving ingredients, the other benefits may need considerable time to show up.

According to the instructions, you’re advised to take two pills with water in the morning, preferably after a small meal. If you feel your energy level has come down, you may also take a third pill during the day. But given the high caffeine content, we would suggest otherwise.

You will have to be patient in order to feel any benefit in terms of memory and cognition. It’s also important to note that in case you are on any other nootropic or consume coffee regularly, the brand recommends a proper cleanse prior to taking Herberall.

Before you start taking Herberall, consult a doctor in case you have any disorder or are on medication, since it should not be consumed alongside prescribed medicines. Also, Herberall is not a substitute for prescription medicines like adderall.

Although the supplement claims to have no side effects per se, the ingredient list doesn’t entirely justify its promise.

At the risk of repeating ourselves, we’d like to state that the high caffeine content may trigger allergies and hypersensitivity in specific individuals. Moreover, it can interfere with your sleeping pattern and lead to addiction. Given its proprietary formula, we’re not sure if the amount of L-Theanine in the formulation can successfully balance the excessive amount of caffeine.

Likewise, the presence of Green Tea and Yerba Mate extract can suppress appetite. Furthermore, certain other ingredients can cause an upset stomach if not taken with a light meal or snack.

The best way to avoid any complications is to stick to the recommended dosages.

1. Is Herberall Worth Trying?

In our opinion, the decision to try Herberall largely depends on the purpose of use. If you’re looking for something that will help you stay active the whole day, then this might be it. Alternatively, if better memory and cognition are higher priorities, then we’d suggest forgoing this supplement and try other alternatives (check out our Eternus Review and Qualia Mind Review).

Long story short, this isn’t a ‘one size fits all’ formula. However, the product tries to suit a majority of the needs and requirements of different users. Here again, various other factors like metabolism, lifestyle, etc. will determine how and when you see results.

2. Are the ingredients safe for consumption?

The natural ingredients are legitimately certified and are seemingly safe for consumption. However, people sensitive to caffeine may want to avoid this product altogether, given the high caffeine content in each serving. Plus, it may also cause sleeplessness if taken late during the day.

3. What are the benefits of Herberall?

The primary short-term benefits include increased energy, productivity, and alertness. Apart from that, it may also help to improve the mood and clear brain fog in some individuals. Moreover, it claims to boost stamina and focus without causing jitters or crashes in users.

Honestly, we had high expectations based on Herberall’s claims, and it does deliver on some of them. But there’s more to it.

While we have nothing against nootropics that take time to work, we’re not very confident if this one will produce any long term effects. Owing to its proprietary formula, we can’t assure you that the quantities of other ingredients in the formulation like Ashwagandha and Huperzine A will yield satisfactory results.

This can possibly be contributed to the overpowering amount of caffeine, which is likely to negate the benefits of all other compounds. Plus, certain substances like Huperzine A leave the risk of developing side effects if not cycled correctly.

Overall, we’d recommend opting for Herberall if you’re desperately on the hunt for a supplement that can provide an abundance of energy in a jiffy. In that sense, the price may also seem justified. If you’re looking for a better long term nootropic to increase your overall brain health, cognitive abilities, and make you feel optimized – we’d look elsewhere.