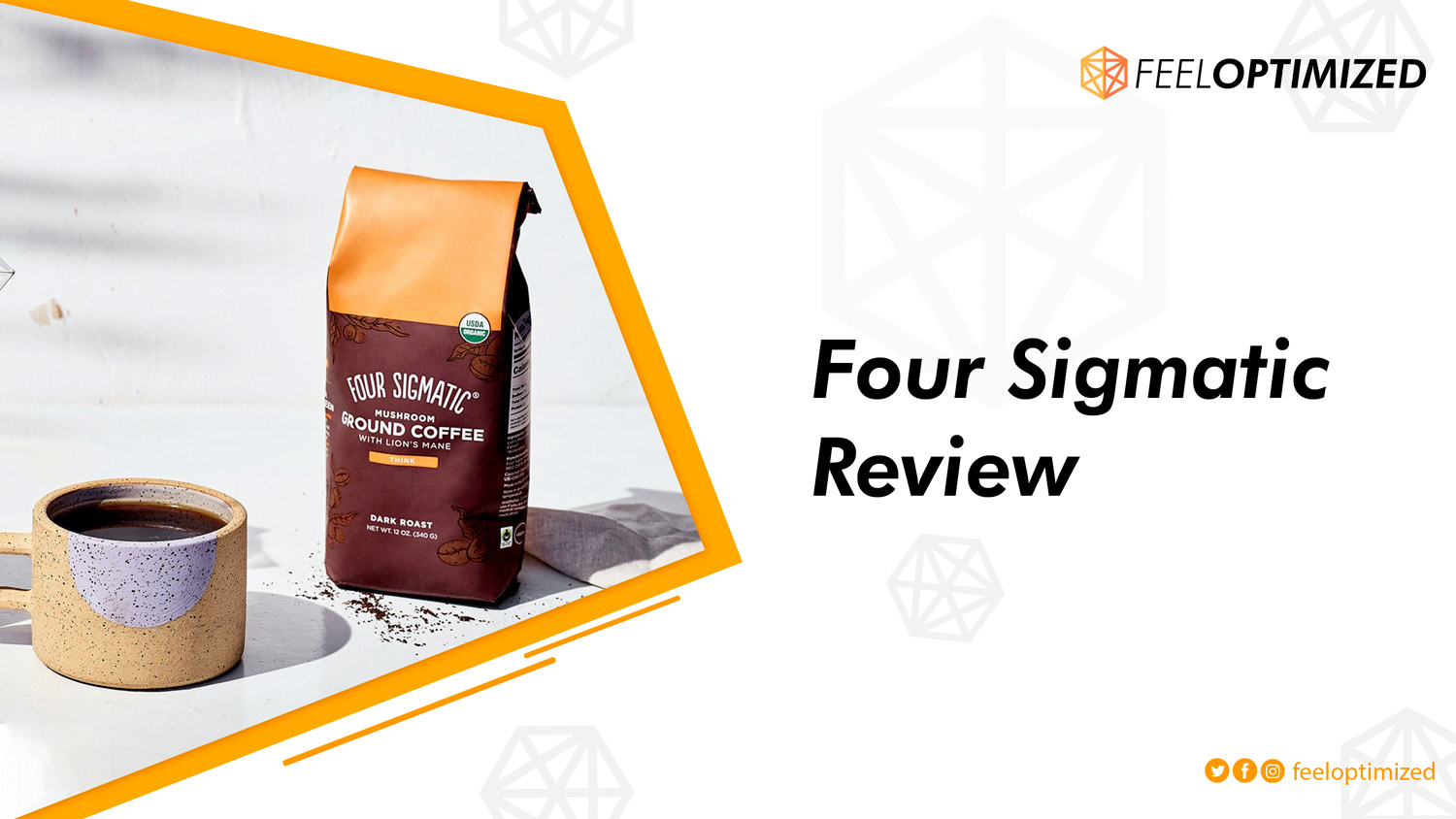 Don’t have time to go through the entire thing in-depth, but want to know about the benefits of mushroom coffee? Here are the highlights of Four Sigmatic’s mushroom coffee:

Who in their wildest dreams would’ve ever thought that one day coffee and mushroom could be fused together? And combined to make something that’s beneficial for your health!

Turns out it is, and a company called Four Sigmatic is making real waves in the mushroom supplement industry with something we can best describe as mushroom coffee for better health. But how much of it is fact, and how much is hype?

That’s what we’re going to explore in this detailed review today.

What Is Four Sigmatic?

Before we dive deep into the product’s intricacies, let’s take a look at the company behind it. Four Sigmatic is a business based in Hertfordshire, UK, though they have a physical establishment here in the US as well.

The brain behind the brand is a team of fitness aficionados led by Tero Isokauppila, a Finnish businessman with a background in chemistry and nutrition. Tero founded Four Sigmatic with the intention of bringing the benefits of medicinal mushrooms to everyone.

The company started its journey way back in 2012, and since then has garnered a steady fan following. The name of the company is a mathematical reference to the best quality superfoods, which the business uses in its product lineup.

Over the years, Four Sigmatic has proven to be an extremely transparent and reliable company that takes care of its customers. The mushroom coffee is its flagship product, though it has a range of other products such as cacao, protein powder, and mushroom elixirs. They have even launched a range of skincare items to complement their product lineup.

Among these, their mushroom coffee is by far its most popular product and is recommended by the likes of Tim Ferriss. Today, we’re going to take a closer look and understand what makes it tick.

Also, for people who are sensitive to caffeine, the caffeine content of mushroom coffee itself might prove to be stimulating enough. This, of course, varies according to the biochemistry of each person taking the product.

The low caffeine content apart, the major highlights of Four Sigmatic’s mushroom coffee are the Lion’s Mane and Chaga mushrooms. Used for thousands of years in ancient Asian medicine, these mushroom varieties are known to have multiple beneficial effects (more details on this later).

Lion’s Mane has a long history of being used to cure anxiety and depression and has beneficial effects against neurodegenerative decline. It’s also associated with the promotion of the Nerve Growth Factor (NGF) in the brain.

At the same time, Chaga is well known for its anti-cancerous and immune-boosting properties. What’s more, mushroom coffee from Four Sigmatic also has Rhodiola Rosea extract, which has multiple health benefits.

Here, we were tempted to ask one question: Four Sigmatic’s mushroom coffee seems like a potent blend, but what makes it different from other similar brands? To understand this, we delved deeper into its manufacturing process…

Why Is Four Sigmatic Different?

When going with mushroom coffee, or any mushroom supplement in general, there are two significant factors to pay attention to. The first is the part of the mushroom used in the product, and the second is the extraction process.

How does this make a difference?

First, let’s take the part of the mushroom used in the extract. Just like any other organism, a mushroom can also be divided into multiple parts. Of these, the primary two are the fruiting body, which is the actual umbrella-like structure we associate mushrooms with, and the mycelium, which is the root network of the fungus.

Now, it’s the whole fruiting body that contains the major beneficial nutrients (namely beta-glucans). The mycelium, on the other hand, is highly deficient in terms of nutrient content because of the substrate that it grows on.

However, the majority of well-known mushroom supplement brands continue to use mycelium as the primary ingredient in their extracts. Since mycelium is usually grown on a grain substrate, the mushroom extract becomes diluted with the starch and rarely contains beneficial properties, if any at all.

Given this information, we were glad to find that Four Sigmatic only uses whole fruiting bodies in their products. This ensures that users get the full benefits of the mushrooms without any grain or starch ‘fillers.’

Another factor that makes Four Sigmatic mushroom coffee (and other mushroom products) different from the rest is the extraction process. A lot of businesses use harmful chemical extraction to extract the most amount of extract for maximum profit.

Four Sigmatic doesn’t take that route but uses the tried-and-tested dual extraction method involving alcohol and water. The dual extraction process helps extract the highest amount of beta-glucans trapped within the cell walls of the mushroom which increases the product’s beneficial qualities.

Also, every mushroom used in Four Sigmatic products is grown on wood, which mimics a wild growth cycle. This results in products that are absolutely natural and full of beneficial nutrients that may not be present in artificial growth cycles.

But what are these benefits that we’ve been talking about for so long? That’s what we’re going to explore in the next section.

Medicinal mushrooms come in many shapes, sizes, and flavors. Of these, three stand out as highly potent: Lion’s Mane, Chaga, and Reishi. Thankfully, we were glad to find that Four Sigmatic uses these very mushrooms in its products.

Lion’s Mane mushroom, also called yamabushitake, is a large and shaggy mushroom that’s white in color. The fungus gets its name from the hairy, mane-like appearance that it possesses. Used in both medicines and cooking, Lion’s Mane has been proven to have multiple health benefits, as discussed below.

Though unsightly in appearance, Chaga mushrooms have been used for centuries in the colder parts of Asia and Siberia. Rich in antioxidants, this mushroom has gained popularity in the western world due to its many benefits, as listed below.

The reason for Chaga’s multiple health benefits is the presence of copious amounts of beta-glucans, triterpenes, and polyphenols, among other nutrients. All these work together to give Chaga users a definite health fillip.

Reishi, also known as Ganoderma lucidum, is a mushroom that’s usually found in the hotter and humid parts of Asia. A long-time component of eastern medicine, Reishi is rich in triterpenoids, peptidoglycans, and polysaccharides such as beta-glucans. The inclusion of Reishi in your diet results in the following benefits:

The presence of beta-glucans and triterpenoids accounts for many of the beneficial effects of the Reishi mushroom. A point of interest here: actual Reishi is rather bitter in taste, indicating the presence of triterpenes. This is usually taken as a primary test for determining the quality of the mushroom. This is just one of the main indicators in identifying the best reishi mushroom supplements.

After going through the many benefits of these mushrooms, we’re sure you are all set to test the products! Well, so were we, and we decided to try the mushroom coffee ourselves, and we’ve got to admit that we were genuinely surprised.

Despite having overall positive reviews by genuine buyers and taking a peek into the product, we were a bit concerned about how ‘mushroom coffee’ would turn out. But our concerns were unnecessary, as we soon found out.

Our team members tried out the coffee with morning breakfast, and to tell you the truth, the taste doesn’t differ much from actual coffee. And although it has a slightly bitter aroma, we reckon that’s on account of the mushroom components in the product.

After a drink, we felt refreshed and charged up. We didn’t feel sleepy throughout the day, and not once did we feel like crashing as with regular coffee. Also, there was none of the anxiety that usually comes with excess caffeine.

It’s crucial to mention that mushroom coffee is NOT going to give you a significant brain boost or enhance your focus. In case you’re looking to boost cognitive function, we suggest you follow our example and supplement Four Sigmatic Products with stacks such as Qualia Mind.

While it’s a common mistake to think that Four Sigmatic only offers mushroom coffee, we’d like to correct you. Apart from its regular range of mushroom coffees, the brand has also branched out to produce protein and cacao.

The Defend range contains plant-based protein powders that can be made into a hearty protein shake. This range works to build immunity, which is so very essential to living a healthy and balanced life.

Finally, the Chill range covers Mushroom Cacao Mix (with Reishi) and a Chai Latte Mix (with Reishi and Turkey Tail). It also includes the Reishi Elixir, all of which deliver the goodness of real mushrooms in a pleasant but natural taste.

To conclude, we can say that though Four Sigmatic is a relatively new brand, has an impressive product lineup, and has grown fast, their products are amazing. Of their many products, though, we’d recommend their mushroom coffee as a product that medicinal mushroom aficionados should try out.

That being said, it can’t be denied that the products are a bit expensive. But considering the benefits that you’ll get, we think the cost is a minor factor that can be ignored. All things considered, Four Sigmatic is a brand that is surely going places and one that can help you feel optimized.