Eternus Review: Can It Really Make You Live Longer? 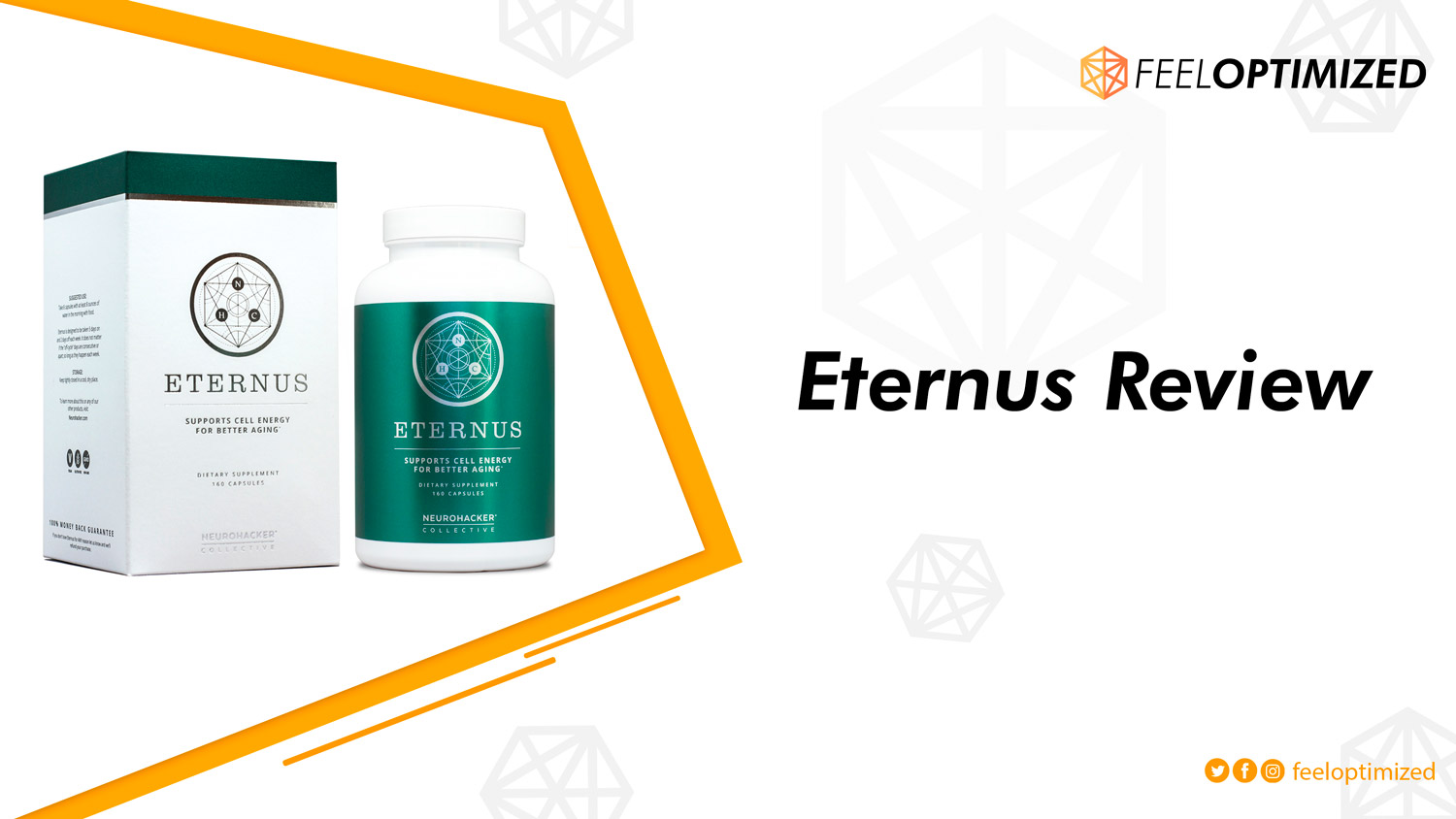 Eternus is a supplement from the Neurohacker Collective claiming to support cell energy for better aging by upregulating NAD+ and ATP. Does this cellular energy product really live up to the hype? Read our review to find out more.

Nobody wants to grow old, but everyone has to. However, with the Eternus supplement, science may have just found the solution to aging.

A quality nootropic stack from the house of Neurohacker Collective, Eternus claims to have anti-aging properties. However, does it deliver on its promise? That’s what we’re going to explore today.

Eternus – What Is It?

Put simply, Eternus is a nootropic supplement that claims to enhance cellular energy and allow the body to age slower. Eternus works with a three-pronged approach to boost your biological functions at a cellular level.

But who are the makers of this product? This supplement comes from the reputable manufacturers of Neurohacker Collective, a biohacking company founded in 2015. Consisting of a team of biohackers, scientists, researchers, and nutrition experts, this is the team responsible for the groundbreaking products, Qualia Focus and Qualia Mind.

So, how is Eternus different from other nootropics in the market?

While most nootropic stacks target the brain and try to enhance its operation employing nootropic stimulants, Eternus doesn’t take that route. Instead, it treats the entire body as a complex cellular system and works to improve its functioning as a unit, thus promoting healthy aging.

The supplement works by preserving DNA telomeres and upregulating Nicotinamide Adenine Dinucleotide (NAD+) and Adenosine Triphosphate (ATP) levels. It also poses as a calorie restriction mimetic, meaning that it gives you the benefits of an intermittent fasting based diet.

Why Should You Take Eternus?

Every living moment, our body is creating as well as destroying thousands upon thousands of cells. During our years of growth, i.e., from our infancy to the late twenties, this process is positive, which is to say that the levels of cellular regeneration far exceeds that of destruction.

However, due to stress, improper diets, and natural life processes, the cellular regeneration rate slows down after we step into our thirties. This is where aging begins, and brings with it the all too common effects such as mental fatigue, fast exhaustion, and brain fog.

The components in Eternus are designed to combat this process. By improving your body’s energy at a cellular level, Eternus helps to improve the rates of cellular regeneration. This allows the body to heal itself at a faster pace and combat the effects of cellular degeneration.

The objective is achieved through mitochondrial biogenesis, in which damaged mitochondria are replaced with healthy ones. This leads to better production of ATP or cellular energy, which slows down the body’s aging rate.

However, this is not the only benefit one can expect from Eternus. The following are some of the positive effects that users of this product can hope to see:

Combined, all these effects are expected to lead to a better, slower aging process that contributes towards improved health.

But can these pills truly turn back time for your biological clock? We had our doubts; that’s why we had members from our team try the product to test its effects.

Our Take On Eternus

First off, we knew that Eternus was not like other nootropics where you get instant results within thirty minutes to an hour. Instead, this was a long term game, where a person’s bodily response to the aging process is delayed.

As a result, any experiment that we set up wouldn’t tell whether the supplement works to prevent aging. But we could compare the effects of the product amongst people in our group in the short term, and extrapolate from there.

Our nootropic enthusiasts on the team volunteered to test the product. We ended up dividing the team into two halves. The first group was provided with two Eternus capsules a day, and the remaining with four capsules a day for the first week.

We didn’t observe much difference in the performance of the test groups over this short period. So, for the second week, we doubled the doses of each group. This is when we began to see some changes.

The group that was taking eight capsules a day began to exhibit higher levels of energy. They also responded well to the stress tests that we subjected them to. What’s more, these members reported experiencing copious amounts of sleep compared to the other group.

As per our observations, we concluded that Eternus has noticeable positive effects when it is continued at the rate of eight capsules a day. While long term effects require more extensive control-based testing, we can expand upon the results of the above experiment to safely say that this supplement does what it promises. 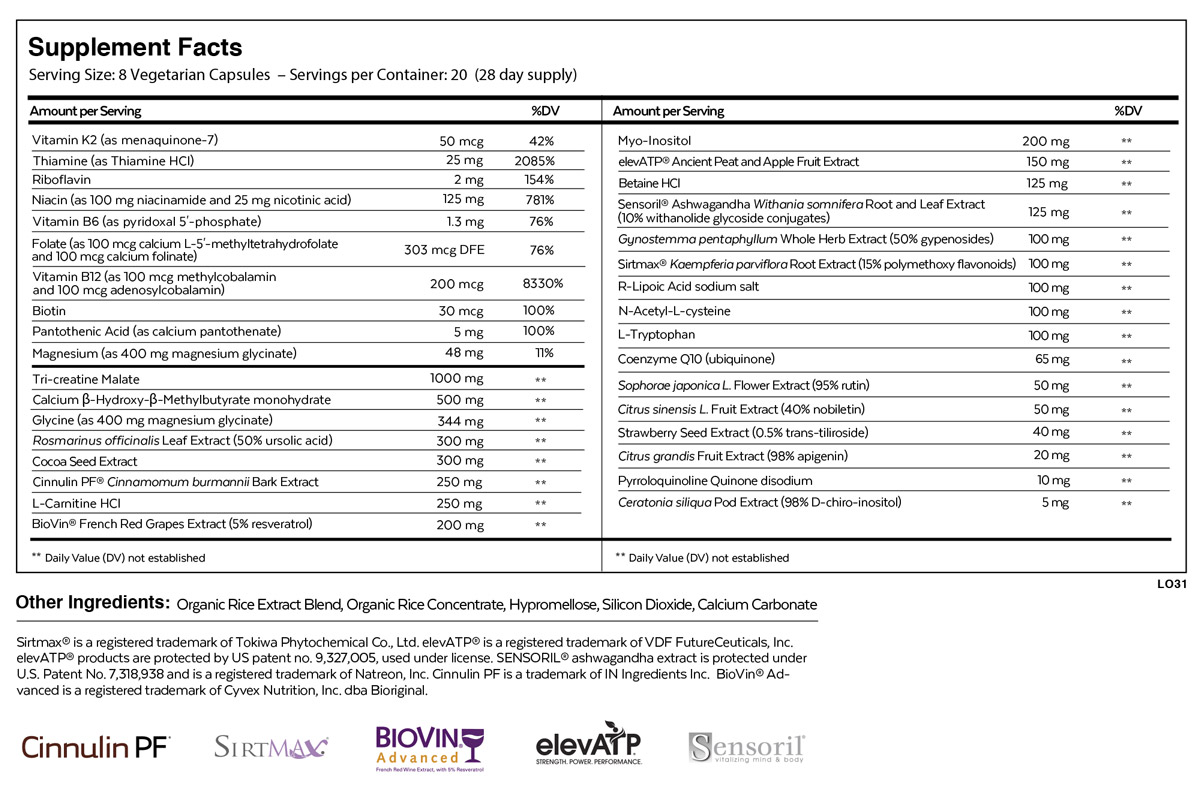 Once we had established that Eternus does indeed bring about the desired effects, we decided to take a deeper look. Peeling back the capsule layers and analyzing the stuff, we were surprised to find that this product is a mix of a whopping 36 ingredients!

Rarely does a nootropic stack contain such a large number of components. The following is a list of the major ingredients that make up this product.

With such a massive list of ingredients inter-playing with each other, it’s understandable that we can’t go into the details of all the active components. Nevertheless, we wanted to take a better look at the significant components of this stack.

This is a compound found in ample quantities in the skin of red grapes, the kind that’s used to manufacture red wine. Cellular studies have established that this compound may be beneficial for mitochondrial health.

This is one of the significant ingredients that promote direct mitochondrial health. Coenzyme Q10 acts both as an antioxidant and a supporter of the respiratory chain. A lack of Coenzyme Q10 leads to a reduction in ATP production; hence, it’s evident how important a role this plays in the functioning of the mitochondria.

A unique compound that consists of three Creatine molecules attached to one Malic acid molecule, Tri-Creatine Malate works to boost your body’s energy levels. It helps in the production of ATP at the cellular level by converting proteins to produce energy. This provides the body with the required vigor for completing day-to-day tasks.

Finally, we must mention Ashwagandha, an ancient Ayurvedic herb that’s well known for its stress reduction capabilities. It’s a powerful antioxidant that helps the body to build up resistance against cellular damage.

Ashwagandha also works to get rid of excess fat, reduce the levels of cortisol (a stress hormone), and ensure faster cellular recovery. Combined with the other ingredients of this nootropic stack, the above four work to promote health and well-being at a cellular level.

The recommended dosage of Eternus is eight capsules a day, five days a week. While this might be too expensive an option for some, we recommend that you stick to it to get the maximum efficacy from the product.

The experiences of our team members corroborate that for optimal effects, you need to maintain the recommended dose. Take the capsules in the morning with breakfast, and you’ll be good to go for the rest of the day. 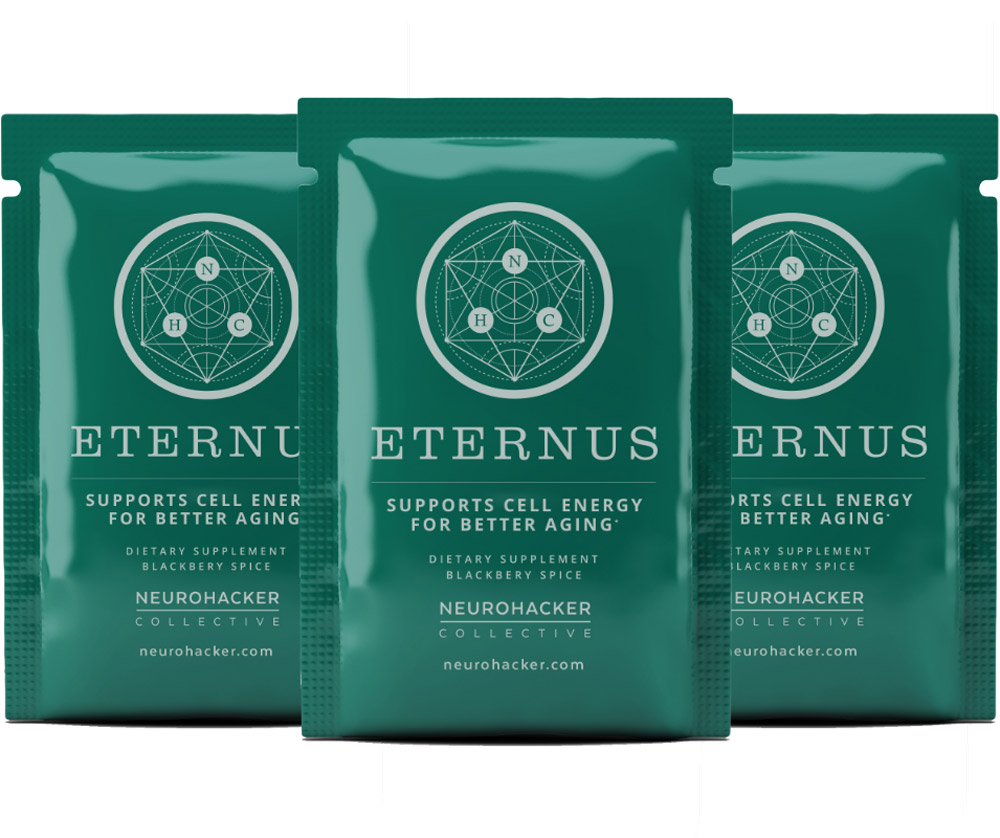 We realize that taking so many capsules can be quite cumbersome, especially if you’re on other nootropic stacks. That’s why Neurohacker Collective has come up with the Eternus Drink Mix, where you can get all the benefits of the capsules in a tasty smoothie.

Since Eternus is intended to be a long-term product, we didn’t notice any immediate side effects in our experiments. If you do notice any symptoms or ill-effects after taking it, remember to discontinue taking the product and consult your doctor immediately.

While Eternus is undoubtedly an excellent nootropic stack that boosts long-term health, the operational word here is long term: you must be prepared to wait for the effects. If you’re looking for instant kicks, we suggest you go for something stronger, such as caffeine.

However, in case you’re prepared to wait it out, Eternus delivers on its promise of extended health and lifelong vitality. So, if you’re ready for longer life, get a dose of Eternus today.

You might have to wait a bit; but hey, you’ll have all the time in the world!