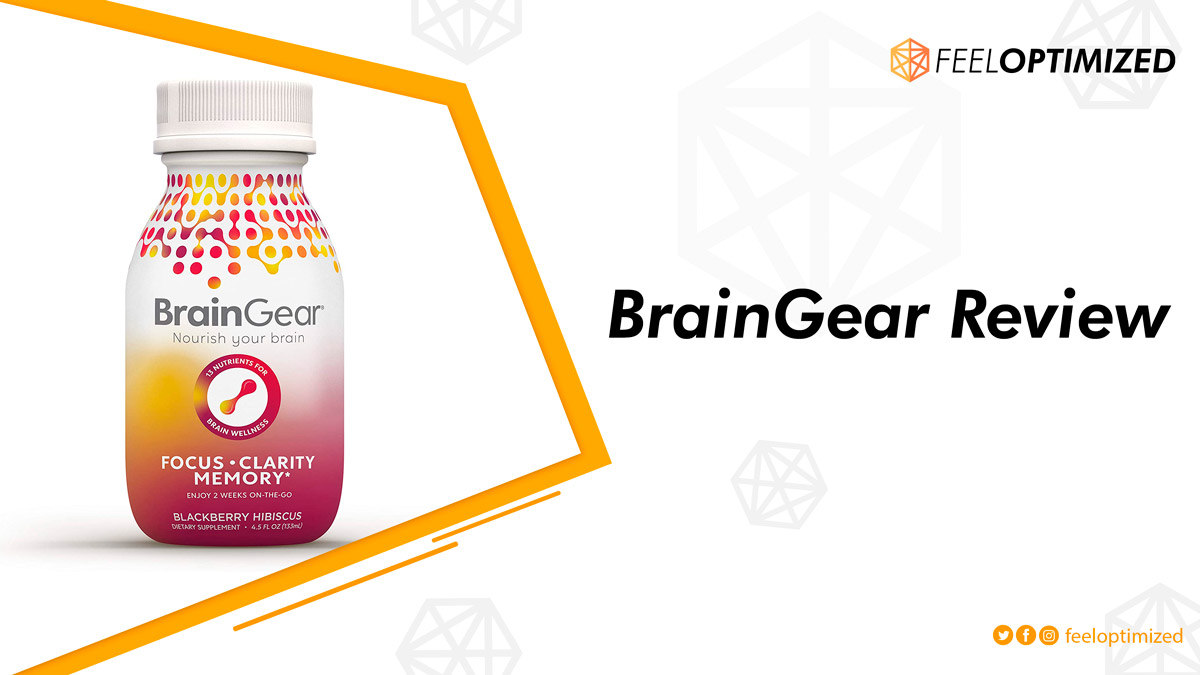 BrainGear is a nootropic supplement that contains 13 ingredients to give you focus, clarity, and concentration. Unlike many other nootropics, BrainGear comes in a drink form so it can be easily consumed without swallowing a large number of pills. Read on to find out if this nootropic drink actually helps your cognitive function, memory support, and mood balance.

And one of the best ways to help get your mind back on track is through Brain Gear. On that note, let’s find out if this popular supplement can actually do what it claims.

What is Brain Gear?

As you may have guessed, Brain Gear is a nootropic supplement that is meant to improve clarity, focus, and concentration. The blend of 13 all-natural ingredients in a ready-to-drink juice bottle promises to promote brain health and fight stress for enhancing overall performance.

Besides, the brand also claims to induce better sleeping patterns and improve mood swings. Moreover, it’s a gluten-free drink that won’t cause any stomach troubles. However, it does contain some amount of stevia extract and organic cane sugar.

Patricia Gutierrez, the founder of the brand, came up with the idea of this product after struggling to cope with work-related stress. Her mental health took a toll, and frequent episodes of forgetfulness and sleeplessness made her consult a neurologist, who advised her to take 13 vital supplements. Although she made significant improvements, Patricia wanted to come up with an easier way to take supplements.

With the help of experienced neurologists from the University of Texas, Boston, Austin, and Stanford, she was finally able to develop this easy-to-take supplement to boost brain functions. The essential nutrients target the neurons, which also results in better cognitive functions.

First and foremost, Brain Gear is especially beneficial for people who find it difficult to swallow pills. Furthermore, it comes in two distinct fruity flavors that appeal to the tastebuds. Let’s take a look at some of the most promising benefits this nootropic drink can provide.

Age and stress are the two most common reasons behind declining cognitive function and memory. Although age-reversal is virtually impossible, Brain Gear does have a high concentration of some crucial nutrients which aids the production of healthy brain cells. Additionally, they help in nullifying the effects of stress, thereby keeping your brain alert.

You can’t expect to be at your best if you feel anxious or agitated all the time. While hormonal changes during the menstrual cycle are a dominant cause of mood fluctuations in women, chemical imbalances in the brain can affect both the genders. To help reduce the occurrence of mood swings, Brain Gear includes a couple of natural ingredients that calm your senses and make you feel relaxed.

The primary job of nootropics is to rejuvenate the brain for enhancing focus and concentration. And with as many as 13 nootropic ingredients, Brain Gear promises to lift your brain fog and boost motivation without taking a lot of time.

To test the company’s claims, we decided to try out the product on some of our co-workers for one week. Some, but not all, of our volunteers reported better decision-making abilities at the end of the test period.

So, it is safe to say that Brain Gear might not have a uniform effect on every user. You may have to wait longer than others to notice any significant improvement in concentration and memory. 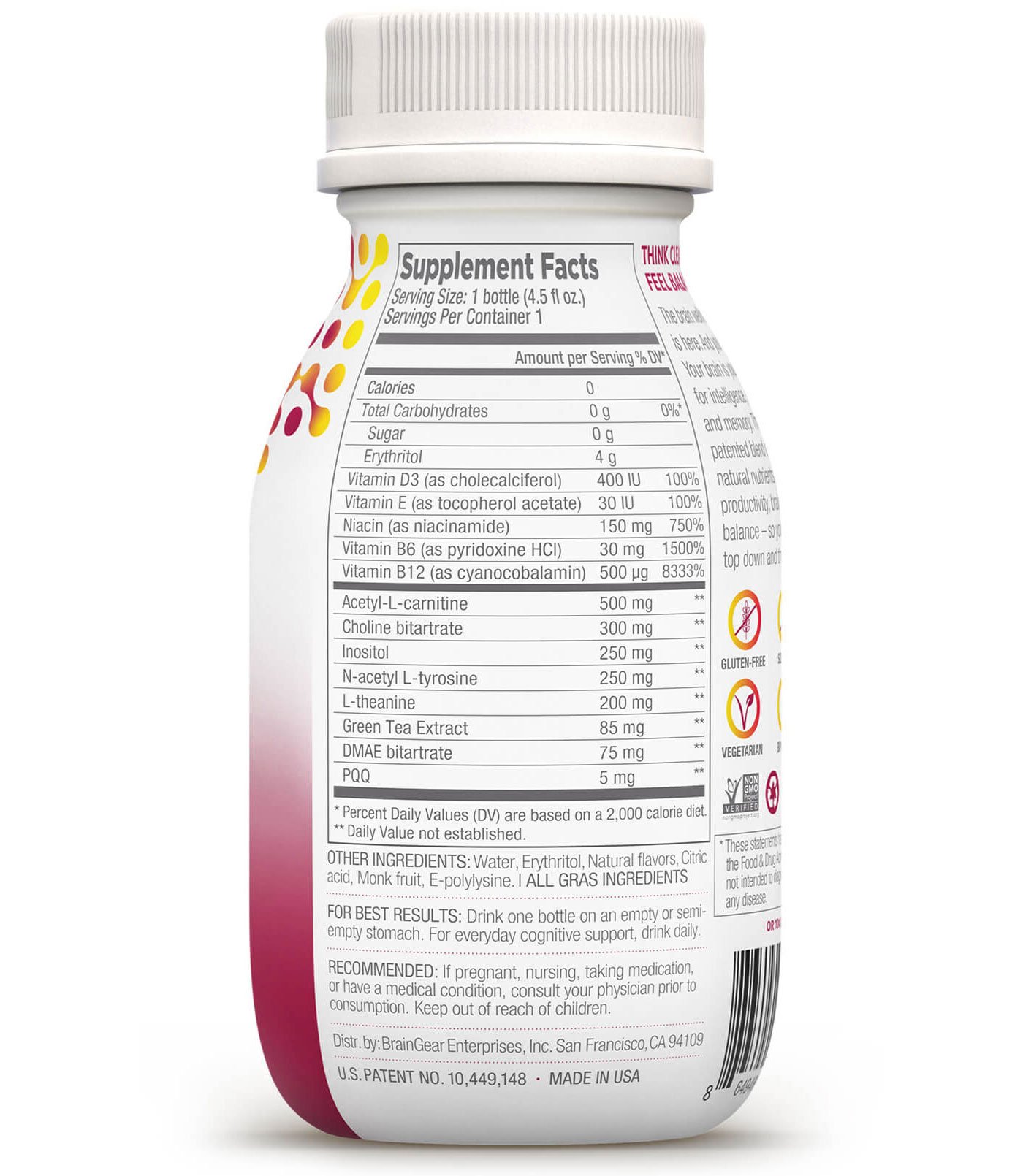 Now that we’ve discussed the potential benefits you may get from Brain Gear, let’s talk about what goes into making this much-talked-about brain supplement. Here’s a closer look at some of the key ingredients that work to deliver on the brand’s promises.

Acetyl L-Carnitine is a compound that protects the nerve and brain cells from injuries caused by depleted oxygen supply or toxins. Also, it slows the aging of brain cells to maintain consistent brain function.

Acetylcholine is a well-known neurotransmitter that helps in memory formation, and choline works to produce just that. Moreover, it prevents memory loss in older people.

The cognitive functions in the brain are controlled by dopamine, a messenger molecule that carries information between neurons. However, when produced in larger quantities, the compound can have many harmful effects like nausea, anxiety, and shortness of breath, among others.

N-acetyl L-tyrosine present in Brain Gear does not only take charge of enhancing brain functions, but it also acts as a shield against the risks of higher dopamine. This is a popular ingredient that can also be found in other nootropics like Awaken Gold.

The proportion of inositol present in this drink helps in regulating the mood to prevent depression. Besides, it aids the other compounds in improving memory and cognition.

Found in green and black tea, L-Theanine is an amino acid that relaxes the mind to get rid of stress and anxiety. Moreover, it doesn’t cause any drowsiness that will make you run late for office!

Regular exposure to pollution, obesity, and unhealthy eating habits are some of the main reasons that contribute to oxidative stress, which can cause brain-damaging issues in the long run.

However, the PQQ compound present in Brain Gear has antioxidant properties that fight the degeneration of brain cells. In addition, it also stimulates nerve growth in the brain, resulting in better attention and overall brain function.

Apart from strengthening the bones and joints, Vitamin D is also known to help reduce the risk of developing Alzheimer’s disease and dementia.

Apart from these seven main ingredients, you will also find substantial amounts of Vitamin B6, Niacin, Dimethylaminoethanol (DMAE) and Green Tea extracts in Brain Gear.

How To Take Brain Gear?

As per the company’s recommendations, Brain Gear should be taken on an empty or semi-empty stomach. For the best results, it’s advisable not to consume any heavy meals until 15 minutes later. You can have it once or twice, but no more than 5 bottles in a day.

Although it tastes best when chilled, if you have traveling plans, it might be helpful to know that BrainGear can last up to two weeks without refrigeration.

Despite being impressed with its all-organic ingredient list, we did notice some side effects during our test. Upon consuming two bottles in a day, some of our co-workers complained of nausea, which we think might be due to the green tea extract. Moreover, it may trigger an allergic reaction in people who are allergic to caffeine

We’d suggest starting by consuming a single bottle per day to see how your body reacts to it. Additionally, it’s highly recommended to consult a doctor before taking it if you fall into one of these groups:

Like most of the other nootropics on the market, Brain Gear comes with a slightly expensive price tag.

Agreed that the benefits may take a little longer to show up and it does come with a share of potential side effects, but some patience and caution is all that’s needed to help recharge your brain and make it alert like never before.

We hope we’ve been able to provide all the answers that you need to make an informed decision.