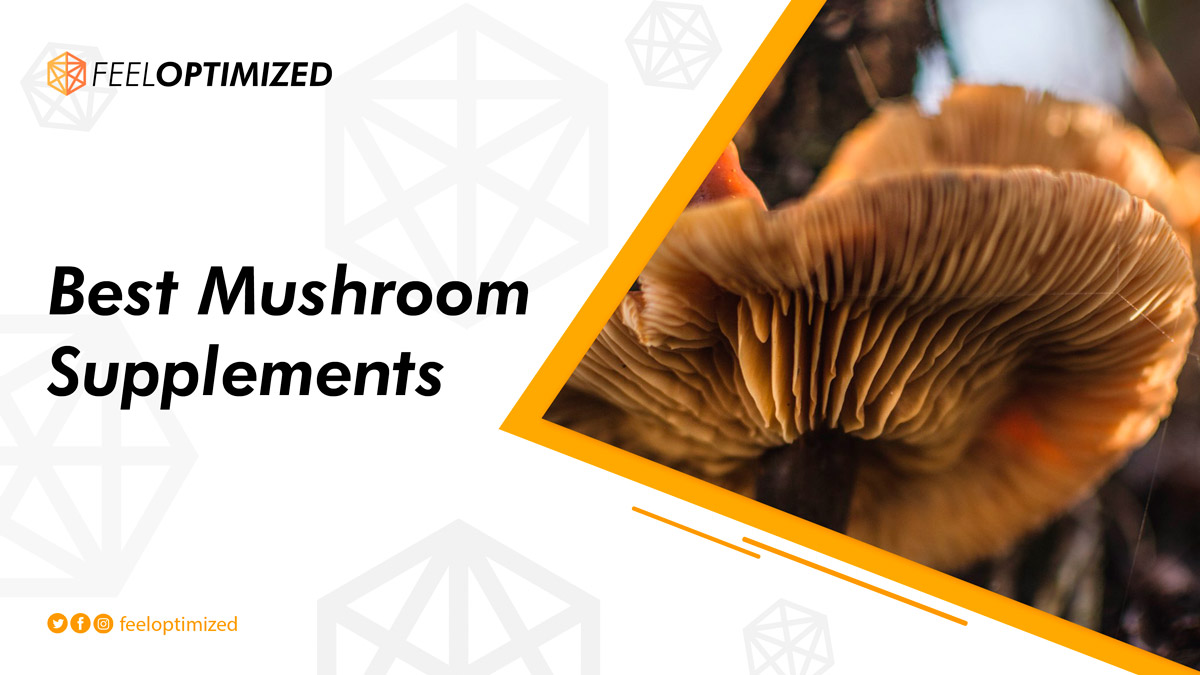 Mushroom supplements have become the talk of the town lately, with more and more people favoring research-backed ingredients over brand claims.

When taken as supplements, medicinal mushrooms can boost your cognitive function and physical performance, among other things like treating anxiety and depression, thereby improving productivity, motivation, and overall energy levels.

Now, let’s take a closer look at these healthy fungi.

What To Look For In Mushroom Supplements?

First things first – why have mushroom supplements gained such momentum in today’s market?

Users of mushroom supplements rely on these products for improvements – both physical and physiological. Be it for better immunity, cognition, or physical performance; clinical evidence suggests that medicinal mushrooms, in fact, can provide considerable positive effects.

The ancient Egyptians and Chinese have used mushroom extracts for centuries. Thus, this is one instance where western technology and modern research work in unison to corroborate the historical anecdotes of these exclusive supplements.

However, not all products have the positive effects you’re aiming for. The front of the container may say ‘mushroom’ but you need to read the label to know more about the nutritional value of a particular product. The following are some of the key points you must consider.

There’s a lot of debate regarding these two components, but we want to give you a clear picture once and for all.

Mushrooms are consumed by acquiring extracts from either whole fruiting bodies or mycelium on grain (MOG). Mycelium is also referred to as grain spawn as it’s the vegetative state of the fungi, and hence, has a much lower potency than fleshy, full-grown fruiting bodies.

Some manufacturers may claim that their supplement includes both mycelium and mushrooms. While that sure sounds like the complete package, especially when labels such as ‘whole spectrum’ are put on the product, in reality it indicates the different components of mushroom included – caps, stems, and mycelium.

So, it’s best not to pick any random product with the word ‘mushroom’ as a lot of companies hide behind that blanket term, when they’re actually selling mycelium extracts.

A reliable brand will list myceliated grain under the “other ingredients” section of the nutritional label. It’s an FDA mandate that herbal supplements should clearly mention what part of the plant it’s made from and any other unrelated ingredients included in the product.

Medicinal extracts contain high levels of the active ingredient found in a particular species of mushroom. In most cases, it is beta-glucans.

The benefit of ingesting extracts comes from their higher bioavailability, meaning they’re easier for the body to absorb. In the case of mushrooms, the extraction process involves the disintegration of chitin, the inedible cellular wall of the fungi that stores the primary active ingredients.

Any extract is typically available both in powder and liquid form. However, when it comes to mushrooms, extracts are classified by what solvent is used in the process: water, alcohol, or both.

A hot water extract is literally what it sounds like. In this method, hot water is used to dissolve soluble ingredients in untreated mushrooms. Typically, the raw ingredient is heated in water for a certain period, at a temperature ranging from 80°C to 175°C.

After extraction, the residual plant material is usually disposed of, while the water is evaporated to get a powdered extract.

As you can guess from the name, an alcohol extract utilizes the properties of alcohol as the solvent. In case of mushroom extracts, ethanol is the most common type of alcohol used in this method. This extraction technique essentially separates the alcohol-soluble compounds from the raw mushroom.

That said, alcohol extracts are generally used to isolate terpenes, flavonoids, and sterols, which are the primary active compounds, otherwise non-water-soluble, present in some mushrooms.

In certain cases, experts employ both water and alcohol extraction techniques, commonly known as dual or double extraction. In this process, the compounds are initially segregated using either hot water or alcohol. After that, the residual plant material is isolated again with the other method.

The next step involves combining the two liquids extracted from both the processes, which now forms the dual extract. This double technique is typically used for mushroom species that contain significant quantities of both water and alcohol-soluble active ingredients. Usually, they are Chaga and Reishi mushrooms.

One of the main active components found in mushrooms is identified as beta-glucans. They are powerful immunomodulators and represent structural elements of cell walls in the fungi.

Although the underlying effects of beta-glucans are still under research, they provide ample opportunities to discover therapeutic agents with multiple health benefits. 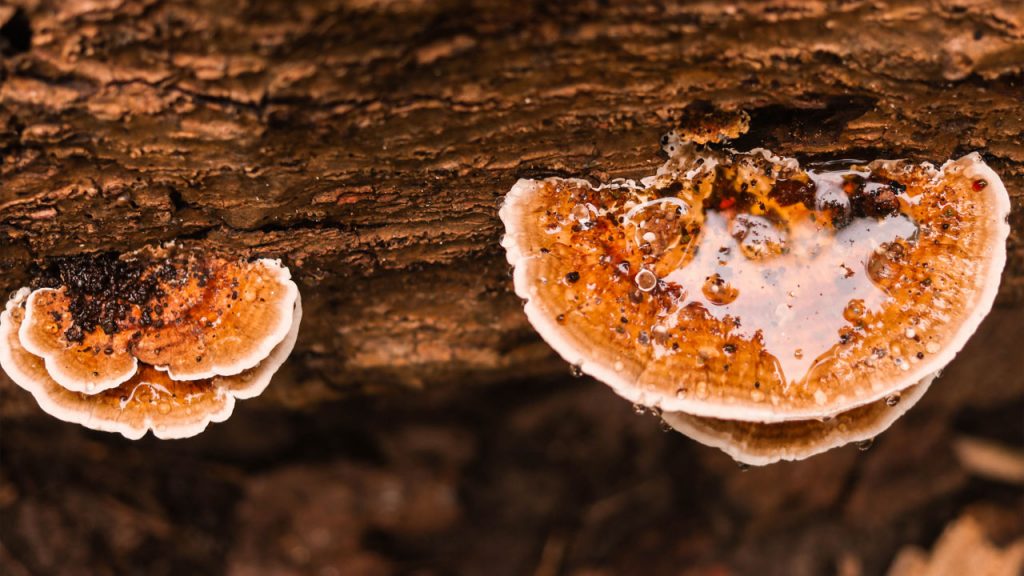 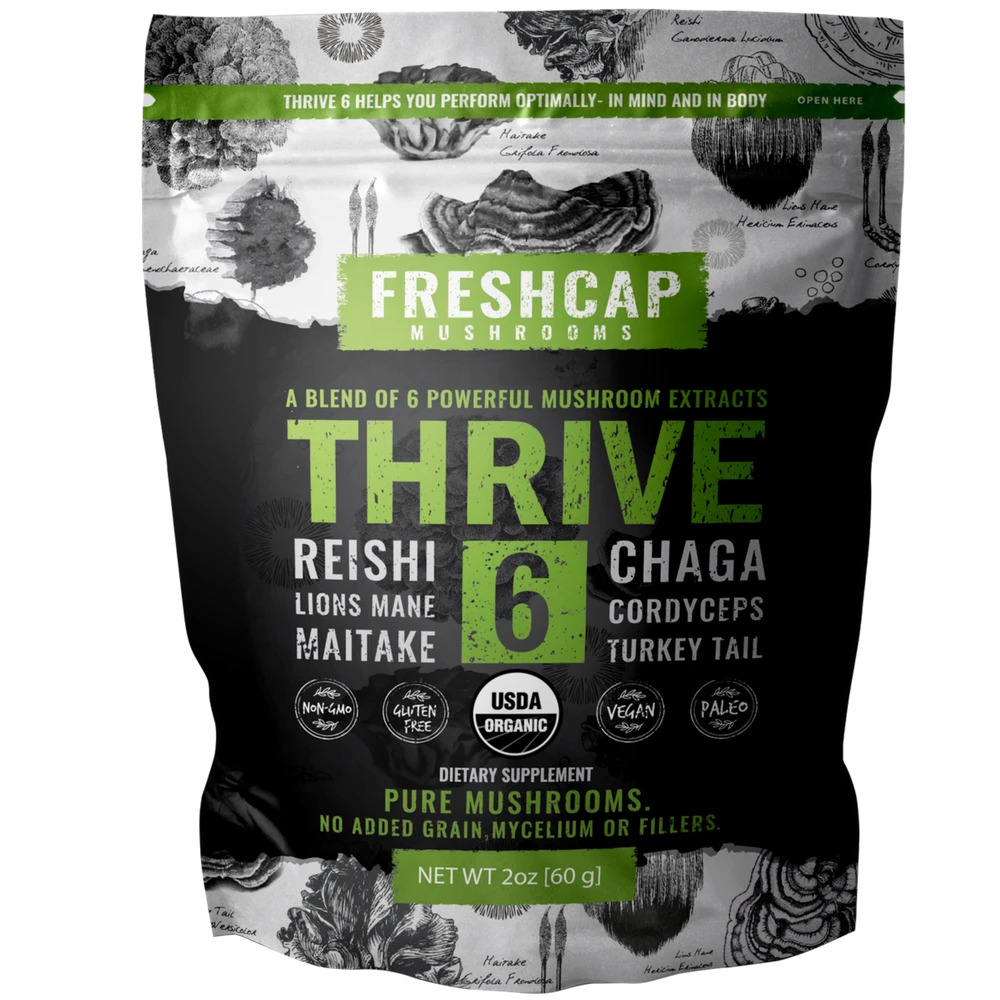 Our first item is Freshcap Mushrooms’ Thrive 6 Mushroom Extract Powder, which is named so as it comprises extracts from 6 potent mushroom varieties. Each packet contains 60 servings of powdered mushroom extracts with equal quantities of the 6 species.

This is our top recommendation mainly because it’s made from whole fruiting bodies and contains no filler, mycelium, starch or extra grains. Also, the supplement is guaranteed to have more than 28% beta-glucans, further enhancing its health benefits.

The mushrooms used here are cultivated naturally in shade-houses with a constant supply of fresh water, air, and light. You’ll be pleased to know that the makers do not use agricultural chemicals while growing the mushrooms.

Also, the hot water extraction method is used to glean the beneficial compounds you’re looking for in this premium quality supplement. Coming to its composition, the product includes extracts of Lions Mane and Reishi that help with mental focus and calmness, respectively. Meanwhile, the Turkey Tail and Maitake extracts help build a stronger immune system.

The Chaga components are good for detoxification, while the Cordyceps contribute to athletic capacities and energy. To ensure purity and high quality, every mushroom crop is individually tested to eliminate contamination from chemicals or heavy metals. Check out our full Thrive 6 review for more information. 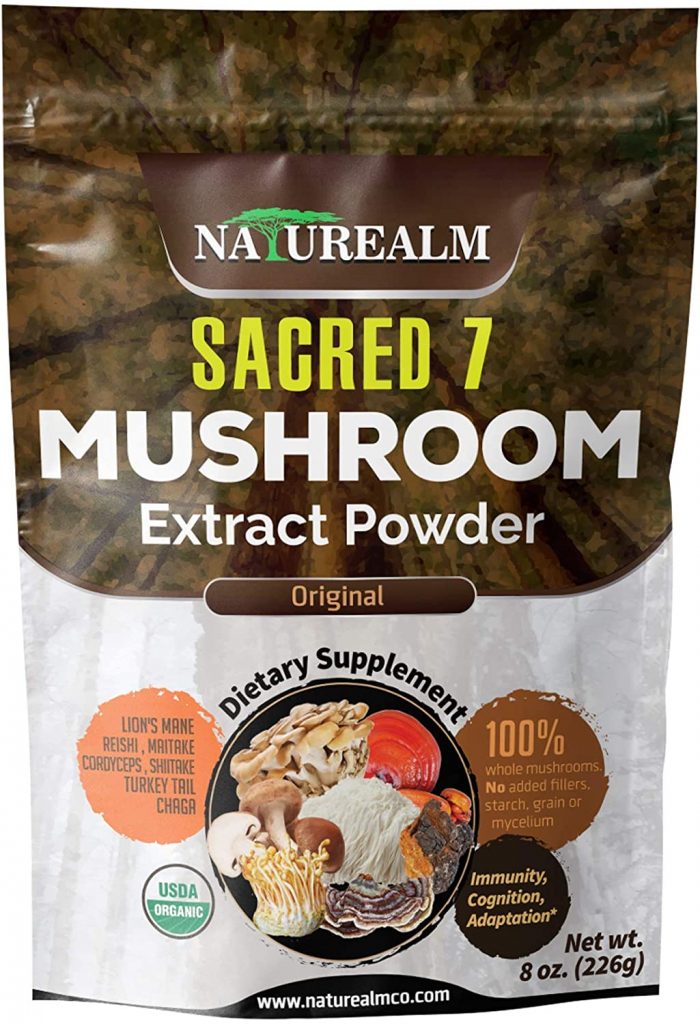 As the name suggests, the Naturealm’s Sacred 7 Mushroom Extract Powder contains organic compounds from 7 different species. Although the brand does not specify the percentage of beta-glucans present, it still ensures a higher content since it’s made from nutrient-dense mushrooms.

Our second product is a versatile superfood powder that you can add to your tea, coffee, or smoothie and consume anyway preferable. It’s made from whole fruiting bodies and does not include any filler substances such as mycelium or starch.

The extraction process employed is the hot water technique wherein purified water is used to break down the mushroom’s cell walls. This method optimizes bioavailability and yields nutrient-rich extracts with higher beta-glucans.

The 7 active ingredients include extracts from Reishi, Maitake, Cordyceps, Shiitake, Lion’s Mane, Turkey Tail, and Chaga. Each of them has their own unique healing properties and health benefits that promote physical and mental well-being. 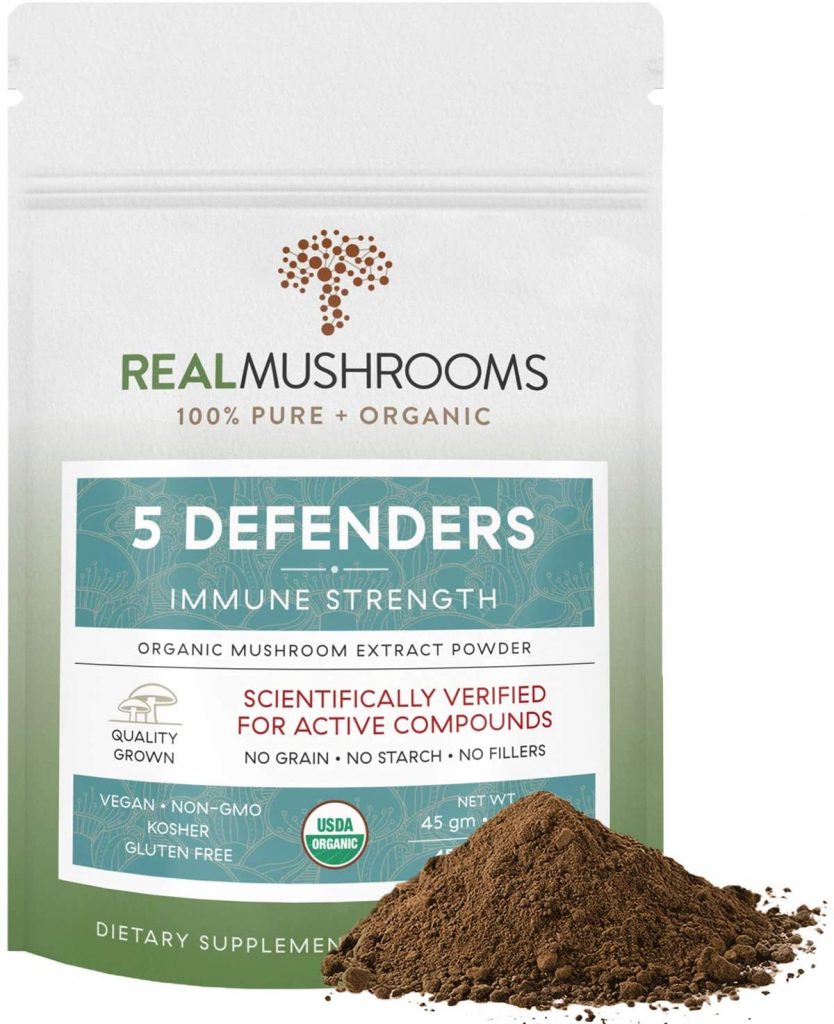 The 5 Defenders Organic Mushroom Extract Blend contains highly concentrated extracts between 8:1 and 15:1 ratios. Long story short, each 1.59oz pouch from this brand is good as 14.9oz of mushrooms.

Before anything else, let’s talk about the ingredients. This supplement contains extracts from 100% organic Reishi, Maitake, Shiitake, Turkey Tail and Chaga mushrooms. You may notice right away that this blend is missing Lion’s Mane (one of our favorite mushrooms) while Thrive 6 and Sacred 7 include it in their blends. We feel that this is fine because you can always supplement it with a lion’s mane supplement for the cognition boost that you’re looking for.

The dual extraction method is used to obtain the highly potent triterpenes and beta-glucans, along with multiple other essential nutrients present in the mushrooms. Besides, it contains no grains or fillers, so you won’t be losing out on health benefits.

The extracts contain more than 20% Beta-glucans, more than 4% Reishi triterpenes and less than 3% starch. Therefore, beta-glucan is the key active ingredient in this medicinal composition. But we also want to emphasize that the manufacturers measure beta-glucan precisely since polysaccharides numbers include starch, and yields a false sense of quality.

So, they make sure that consumers are aware of the real nutritional value before taking the supplement. Simply incorporate it into your diet by mixing the powder with tea, coffee, smoothies, shakes or post-workout energy drinks for maximum benefit. The product is about 80-90% soluble in water, so you can also use it as a flavor enhancer or condiment in your favorite dishes. Check out our complete 5 Defenders review for more information. 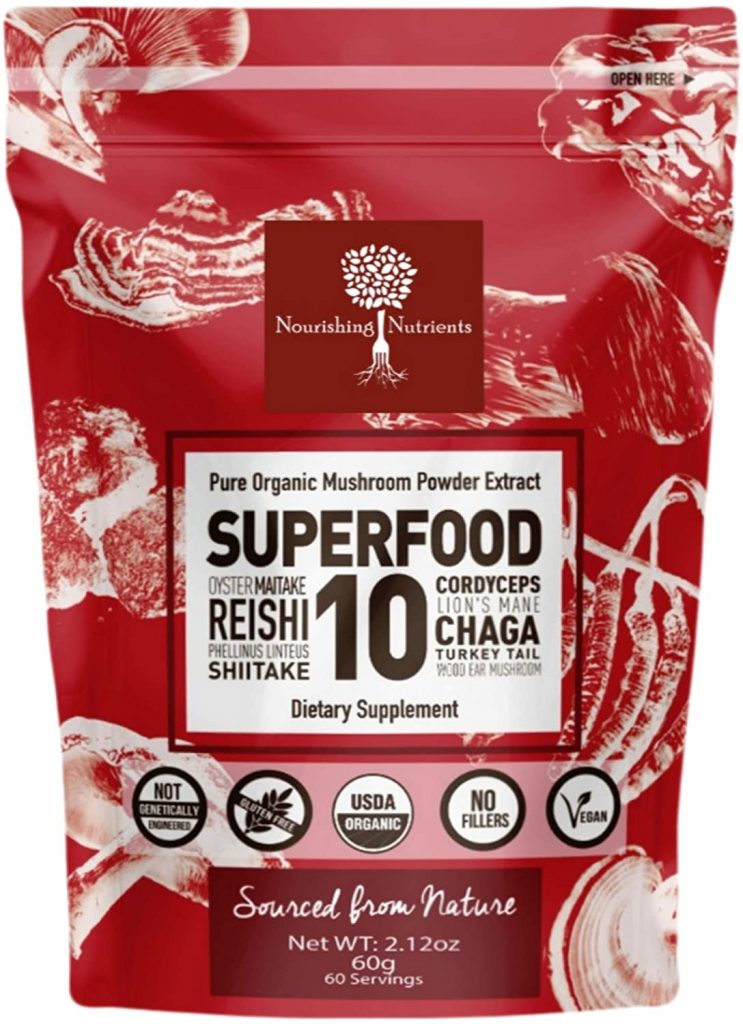 Nourishing Nutrients has been making a few splashes lately with their SUPERFOOD 10 Organic Mushroom Powder Extract Supplement. The brand guarantees the highest quality and potency as they source their raw materials directly from the place of origin.

During the extraction process, hot, purified water is used at a 14:1 ratio, thus ensuring maximum bioavailability. Among the 10 active components, extracts from Reishi, Lion’s Mane, Wood Ear, and Shiitake have proven mood-lifting and stress-lowering properties. Meanwhile, Cordyceps and Chaga are great at increasing stamina.

All the 10 mushroom varieties boost immunity and healthy cell growth. Furthermore, the product has beta-glucan levels that exceed above 30%. What you get is pure, nutrition-dense powder without even a hint of mycelium or other fillers.

The packet contains 60 servings of rich mushroom extracts that you include in your diet by adding it to tea, coffee, smoothies, soups, broths, or even as seasoning for recipes.

The use of medicinal mushrooms has been in practice for thousands of years, but it was only recently that they took the form of supplements. That said, not all supplements have the same nutritional value and may not yield the results you’re looking for.

There are several factors that can reduce the efficacy of mushrooms. For instance, poor quality crops, imprecise extractions, and filler stuffing could adversely impact the quality of the product.

That’s why we recommend conducting thorough research on your part before investing in a supplement. Buy a supplement only after you’re absolutely sure about its composition and results.