Azoth 2.0 Review: Read This Before Buying 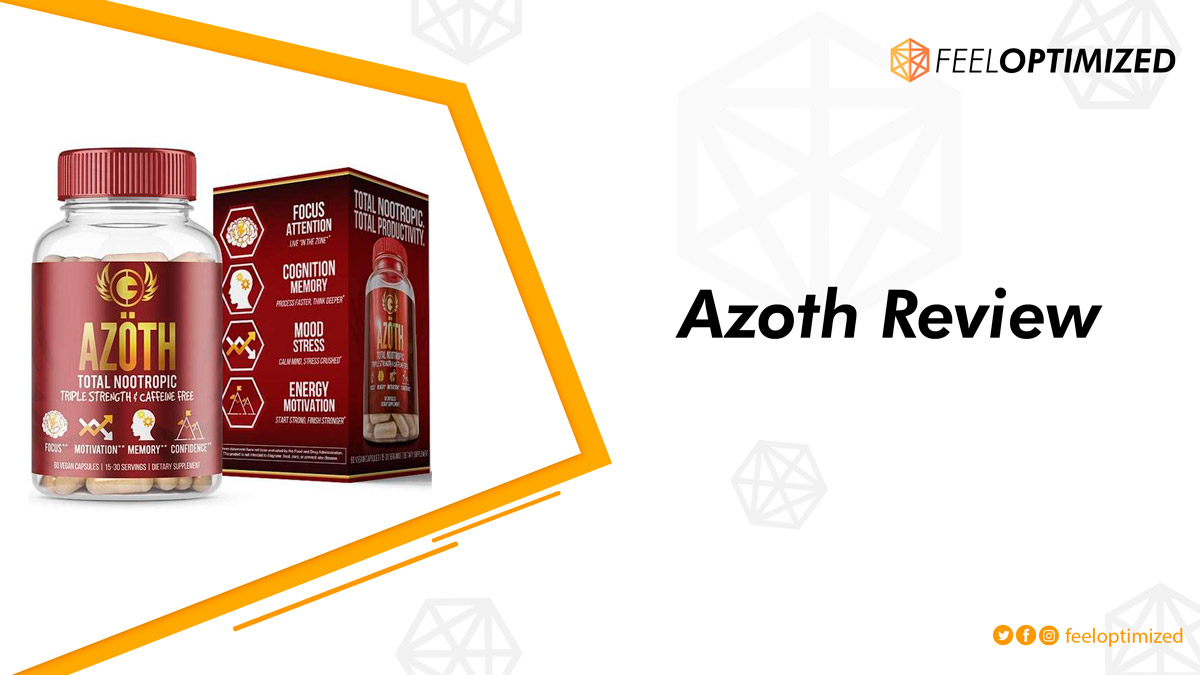 Azoth 2.0 is a nootropic supplement that claims to help you achieve a level of controlled alertness and optimism much like getting a restful night’s sleep without crashing. The brand has a sizeable following so we wanted to see if these claims were true.

When it comes to the nootropics market, Azoth is a well-known brand. It even has a dedicated customer base who swear by it.

Recently, the manufacturers came up with an improvement in the product. Labeled as Azoth 2.0, this supplement is supposed to take the effects of the original Azoth to the next level. But is it truly all that it’s hyped up to be?

As most nootropic enthusiasts already know, the original Azoth was a very well-received stack that climbed to the top of the charts across the world. So much so that the manufacturers decided to come up with an optimized version of the supplement.

Labeled Azoth 2.0, this product is a potent blend of nine nootropic ingredients that help to enhance your cognitive functions. Azoth 2.0 is marketed as a total nootropic, that allows the user to reach peak performance and productivity.

At least that’s what the company claims on its website. So, we decided to take a closer look at the company and understand whether its claims hold true. What we found had us pleased, but with a few significant caveats.

Azoth is an all American brand that operates entirely from within the USA. This means that every bottle of Azoth capsules is formulated, manufactured, and sold within the country. This benefit makes it preferable to other brands that source foreign ingredients and have offshore manufacturing facilities.

The company is based in Boston, Massachusetts, and was founded by Prady Tewarie, a young entrepreneur. We were glad to find that the company is wholly owned by the founder, which means the company doesn’t have to compromise on its vision to please any investors.

Azoth is one of the few companies in the nootropics market that promise a personalized service that aims to please. And from the positive customer feedback, it’s evident that the company is undoubtedly achieving its goals.

So far, we’ve established that the company behind the product was legit and fully stood by its claims. But does the product itself deliver on its promises? To figure that out, we decided to test the product ourselves. 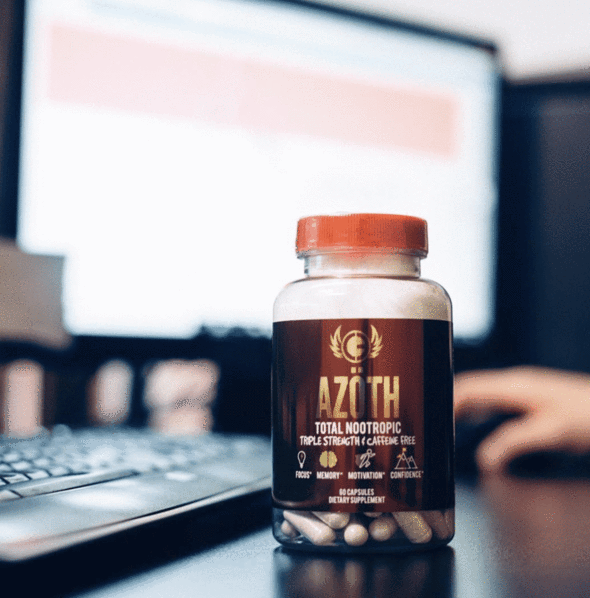 Our Thoughts On The Azoth 2.0 Formula

To thoroughly analyze the efficacy of Azoth 2.0, we decided to perform a three-week trial run with some members of our team. Some team members were given actual Azoth 2.0 supplements, while the other half were provided with placebos.

For the first seven days, we provided members on our team with two Azoth 2.0 capsules a day. The effects that they reported were far from spectacular. Our team members said that they did feel overall more energetic and motivated than before, but our analysis did not reveal a significant cognitive boost as compared to the control group.

That’s why, in the following week, we decided to amp up the dosage to four capsules a day. And this is where we observed noticeable differences. Team members taking the real supplement began to show noticeable improvements in energy and motivation.

We tried increasing the dosage to five capsules a day for the final week of testing. But this resulted in some of our members feeling a little nauseous, which is why we decided to stick to four capsules a day as the ideal dose.

From our team members’ experiences with the supplement, we learned that Azoth 2.0 is a well-thought-out product that provides ample doses of the combined nootropic stack. The trouble is that it’s manufactured to target a wide range of symptoms from anxiety to short-term memory enhancement.

This makes it somewhat less effective than a targeted product that’s meant to serve a single need. The following are some of the things that we’d like changed in the Azoth 2.0 formula.

There’s no denying the fact that Azoth 2.0 contains a compelling blend of ingredients (more on that later). But nevertheless, it does leave some things to be desired.

First off, we’d like to talk a bit about the dosage. As our experiments revealed, for the optimal dosage, you need to take four capsules a day. Since each bottle of Azoth 2.0 contains only sixty capsules, at four capsules a day, a bottle lasts for only fifteen days!

This makes it a pretty expensive supplement, in our opinion. We’d like it if the manufacturers consider modifying the formulation so that two capsules a day suffice. Maybe a hint for Azoth 3.0 in the future?

Also, while this stack contains adequate amounts of anti-anxiety ingredients, it doesn’t have much in the way of components that boost brain health in the long term. This is something that needs to be improved.

What’s more, the formula doesn’t have any components with strong anti-oxidative properties. And as everyone knows, a proper nootropic should shield the brain from oxidative damages. Further, apart from Bacopa Monnieri, there are no components that boost long term memory retention.

Finally, one of the significant components of the stack is Huperzine-A, which has to be periodically cycled for maximum effect. Plus, it also has a few adverse side effects such as vomiting, increased blood pressure, and in some cases, diarrhea.

We’d feel more comfortable with the product if it removed the above component. However, considering that Azoth 2.0 is still a well-received formulation, we peeled back the supplement’s layers and analyzed the individual ingredients that comprise this stack.

This is what we found. 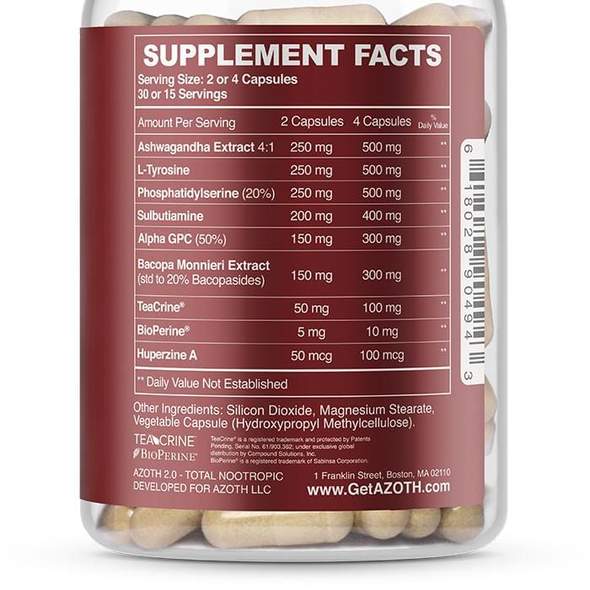 Despite the changes that we’d like to see in the product, we must admit that Azoth 2.0 does boast of an impressive ingredient lineup. It contains a total of nine active ingredients, and apart from Huperzine-A, the remaining eight don’t have any major side effects.

The following is a detailed analysis of each of them, in the order they’re arranged on the supplement bottle’s label.

The first principal component is Ashwagandha, an Ayurvedic herb that’s known to reduce cortisol levels in the blood. This leads to a reduction of anxiety and allows the brain to recover faster from daily stress. It also promotes better sleep and provides the body with energy to perform.

L-Tyrosine is an essential amino acid that leads to better alertness and increased levels of dopamine. It’s beneficial in promoting mental clarity and reducing stress-induced lack of focus. It also helps to improve neurotransmitter concentrations and enhance norepinephrine levels.

This is an essential fat that’s required to protect the neural connections in the brain. It improves cognitive function, boosts nutrient transmission in the brain, and amps up creativity. It’s also believed to improve memory capacity in older individuals.

A synthetic version of Vitamin B1, this highly bioavailable substance helps in the augmentation of dopamine and glutamate, improving neural communication in the brain. However, this is a synthetic component, which essentially disproves the maker’s claim that Azoth 2.0 is all-natural.

This nootropic helps in the prevention of cognitive decline as well as improves learning ability. It also works to boost the production and efficacy of acetylcholine, which improves concentration, cognitive processing, and short-term memory. Overall, one of the better ways to raise short-term brain power and focus.

Another Ayurvedic component like Ashwagandha, Bacopa is a memory booster whose effects build up over time and enhance long-term memory. It’s also known to slow down the effects of cognitive decline and promote mental function.

One of the best-known alternatives to caffeine, Teacrine provides the boost of caffeine without its adverse side effects. Although its impact is slightly less potent than caffeine, it gives the required stimulation for a proper brain-boost.

This is the one component that we have some reservations about. It’s known for inhibiting the production of acetylcholinesterase and slowing down cognitive decline. This makes it a pretty potent nootropic component.

However, it has several side effects, like we already mentioned. The only solace is that it’s present in very low concentrations in Azoth 2.0, making it a tad less worrisome.

The primary function of Bioperine in Azoth 2.0 is to improve the supplement’s bioavailability. It’s also a known booster of norepinephrine, dopamine, and serotonin, which enhances memory and mood.

From the results of our experiments, we are of the opinion that Azoth 2.0 is best taken in the morning at a dose of four capsules a day. Also, for optimal effects, make sure to accompany the supplement with a diet of healthy fats, as this helps to improve its efficacy.

You can try to take five capsules a day, and we daresay it will lead to more enhanced performance. But still, if you feel sick, stop taking the meds and visit your doctor immediately.

Also, due to the presence of Huperzine-A, we recommend you cycle the supplement to achieve maximum effects. Begin with two weeks on and then one week off, and graduate to three weeks on, one week off.

During our experiments, the only negative effect we observed was a slight nauseousness in some of our team members. We suspect this might be due to the presence of Huperzine-A, hence we recommend cycling it.

Other than that, there were no severe negative impacts of the supplement. We can confidently say that Azoth 2.0 is a genuinely effective nootropic that doesn’t have any harmful components that may cause long-term damage.

At the end of the day, Azoth 2.0 is a viable nootropic supplement that’s perfect for short term memory and cognitive boosts. You just need to be mindful to cycle the supplement due to the Huperzine-A component. Although effective, we cannot recommend that our readers take this supplement due to the potential adverse side effects of this ingredient.

There are plenty of other supplements on the market today that contain a formulation that is safe and effective. For example, you can check out our STAQ Performer review or others by clicking the link below.