Awaken Gold Review: Is This Nootropic Stack Worth The Hype? 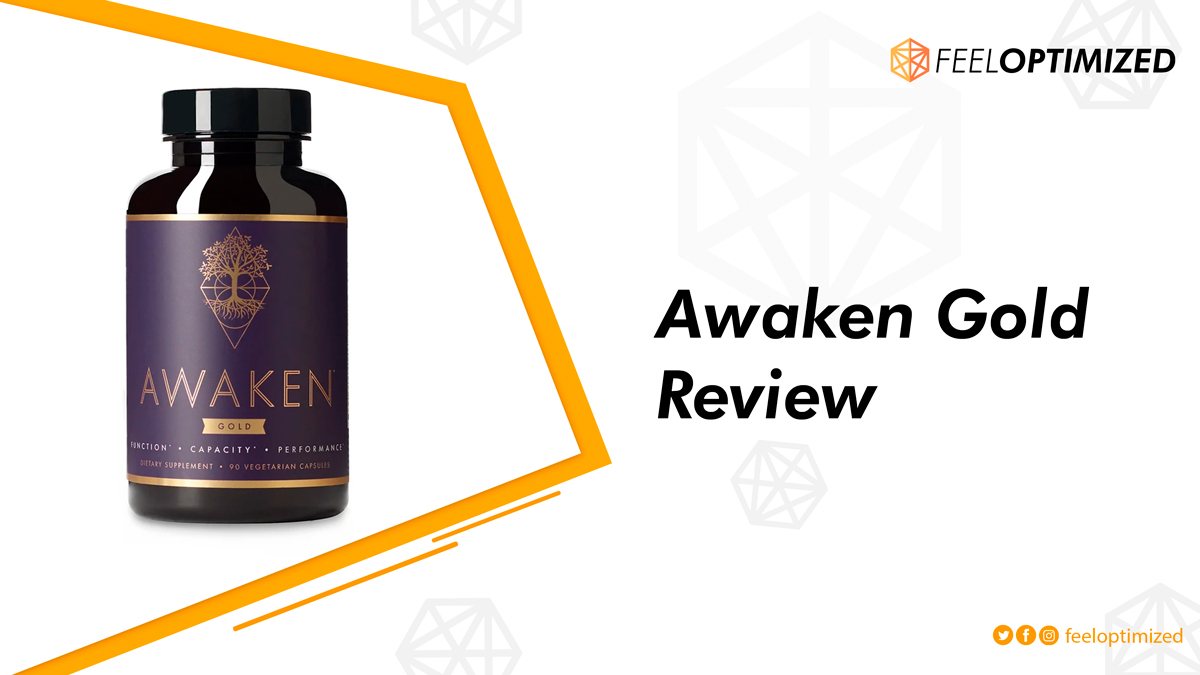 AWAKEN GOLD is a daytime nootropic that claims to nourish your brain, increase your ingenuity, and unleash your creativity. Read our review to find out if it lives up to the hype.

In the current world economy, high cognitive capacity is synonymous with a better lifestyle. And who wouldn’t want to live it large, right?

That’s why you need to give your brain the holistic care it deserves. And Awaken Gold is a nootropic stack that promises to do just that. Comprising eleven active ingredients, this is a supplement that’s got nootropic aficionados around the world interested.

But is it worth all the hype? That’s what we’re going to explore today.

Awaken Gold is one of the popular nootropic supplements that are available today. Advertised as a ‘Daytime nootropic,’ the product is meant to enhance intelligence, boost creativity, and provide the nutritional framework required for overall cognitive development.

The organization behind this product is Awaken Alchemy, a Brooklyn-based company that’s dedicated itself to the development of nootropics for the masses. The company started operations with the supplement Awaken, then went on to develop two more, Dream and Thrive.

Awaken Gold is the enhanced version of Awaken and contains the same eleven ingredients as the original product. The only difference between the two is that the Gold version adds Noopept to the mix, making for a potent nootropic stack.

According to the manufacturers, a daily dose of Awaken Gold helps to augment neuroplastic development in the brain. This leads to better focus, enhanced mental clarity, and improved brain health.

The company claims that all its products are 100% American-made, and our investigations confirm that. Plus, the capsules are caffeine-free, and apart from Noopept, every other ingredient is derived from natural sources. This makes it 100% vegetarian.

Overall, the company has a good reputation among users and is known to provide quality products. Plus, they offer worldwide free shipping, which is a bonus if you ask us.

To answer this question effectively, we conducted a series of surveys (both online and offline), and the results were very positive. According to a majority of users, Awaken Gold is highly beneficial in improving brain performance.

The secret behind this has to be the high-quality, genuinely sourced ingredients that the company uses in the product (more on this later). Being an exogenous stimulant, Awaken Gold improves cognitive functioning by regulating and calibrating the chemical balance in your brain.

The following are some of the many benefits you can expect to experience when taking the supplement:

In short, this product contains all that is needed to improve overall mental performance. At least, that’s what the market says. But we’re not one to believe in what is said unless we test it out ourselves. So first, we decided to take a look at what ingredients the stack comprises.

Noopept also improves Nerve Growth Factor (NGF) and Brain-Derived Neurotrophic Factor (BDNF), which contribute towards better neuroplasticity and help the brain repair itself. It also is a great nootropic for improving motivation levels that regulate dopamine levels in the brain. In Awaken Gold, Noopept is combined with Citicoline to enhance its functionality.

A bio-produced neuro-amplifier, PEA has multiple functions, such as improving clarity, mood, and overall sensory perceptions. It works to enhance neurotransmission and augments the action of Dopamine and Norepinephrine for providing better cognitive performance. What’s more, it also improves the efficacy of Acetylcholine and Serotonin in the brain.

PQQ in Awaken Gold serves to reverse cellular aging by increasing mitochondrial activity, hence augmenting cellular energy. This, in turn, works to improve the levels of Acetylcholine in the brain and provides the organ with higher energy levels. PQQ also helps to strengthen the central nervous system, as well as heart health.

A staple of most nootropic stacks, L-Theanine is an amino acid that has been shown to provide users with improved levels of focus, alertness, and cognitive function. The compound increases alpha-wave activity in the brain, along with Serotonin, Dopamine, and GABA levels.

L-Theanine has a positive impact on BDNF and NGF, thus encouraging neural repair and regeneration. It also protects the brain from being over-stimulated, thus streamlining the overall cognitive flow.

A potent amino acid, Tyrosine acts as the source of essential neurotransmitters and is required for better mental performance. The compound helps in neural growth, promotes a positive mood, and provides better mental clarity. What’s more, it also works to enhance cognitive abilities under conditions of intense stress. This is a popular ingredient that can also be found in other nootropics like BrainGear.

An ancient Ayurvedic herb, Ashwagandha is considered beneficial for promoting better mental and physical health. Awaken Gold uses Ashwagandha in the form of the patented extract KSM-66, which contains the original components of the herb in the right proportions.

Ashwagandha boosts mental faculties and also helps to reduce anxiety levels. This allows users to maintain a balanced mental state, which translates to better cognition. Plus, the herb is also beneficial in improving immune system activity.

Citicoline is one of the essential components required for the production of Acetylcholine, a much-needed neurotransmitter. Extremely bioavailable, Citicoline gets absorbed by the system quickly and begins to show effects.

Research has shown Citicoline to be useful in increasing memory function, enhancing focus, and maintaining good brain health. It also works with other nootropics present in Awaken Gold and boosts their efficacy.

This is a bioabsorbable Uridine supplement that is readily absorbed by the brain. Uridine is beneficial for neural regeneration and also aids in better neuroplasticity, which has been directly linked to higher cognitive functions.

It’s also vital for the synthesis of Acetylcholine as well as Phosphatidylcholine. In Awaken Gold, Uridine achieves extra potency when working along with Methylcobalamin and Citicoline.

Vitamin B12 is required for cellular-level metabolism, and in the form of Methylcobalamin, it’s incredibly bioavailable. It helps to sustain and improve brain health, enhance moods, and give you better energy levels. It also acts as a cofactor in the production of neurotransmitters such as Dopamine, Serotonin, and Norepinephrine.

Derived from black pepper, Bioperine is a bioavailability booster that improves the absorption and efficacy of other components in Awaken Gold. Especially when combined with Ashwagandha, Bioperine enhances the potency of the herb manifold.

On paper, the ingredient list of Awaken Gold is pretty impressive. But does it live up to its promise? To be thorough, we decided to test the stack over three weeks. And this is what the results had to offer.

We might have mentioned this before, but nootropics act differently in different people. That’s why, to be conclusive, we carried out the test over a group of 30 volunteers, 15 of whom were given actual Awaken Gold Capsules, and the rest were supplied with placebos in a blind trial.

We tested each of the experiment and control groups using mathematical puzzles and brain games after the first week of taking two capsules every day. Both groups were supplied with problem sets of equal difficulty, and the samples were distributed randomly.

The results, however, were firmly in favor of the group receiving actual Awaken Gold. Their cognitive performance improved by almost 5-7%, which is a massive increase when you consider they’d been taking the supplement for only a week.

Deciding to push things further, we increased the dosage to three capsules every day in the second week and four in the third. As expected, the experiment group’s mental faculties improved during the second week, and they could quickly solve more complex problems as compared to the control group. What’s more, they also exhibited better energy levels and elevated moods.

In the third week, however, pushing the dose up to four capsules a day didn’t have much effect; also, some of the subjects experienced a temporary tunnel vision. This led us to settle on three capsules a day as the optimal dosage.

Overall, our experiments proved one thing: Awaken Gold is indeed as effective as advertised, if not more.

As mentioned above, our experiments suggested that three capsules a day are the best dosage for most people. You can take the capsules in the morning on an empty stomach or in the afternoon with lunch.

The capsule takes about 30 minutes to kick into action. This means you can time your dose before any critical task such as a presentation or a meeting. Also, it’s recommended that you avoid taking more than four capsules a day.

It’s important to note here that due to the use of Noopept, Awaken Gold should ideally be cycled in the form of 56 days on, and then 4 days off. From our experience, although this cycling regimen doesn’t have a significant impact, we suggest you stick to it for the best results.

Awaken Gold isn’t habit-forming, which means you won’t experience severe withdrawal symptoms once you stop taking the supplement. However, sudden and irregular breaks in schedule may reduce the efficacy of the doses.

During our tests, we noticed some subjects experiencing mild headaches for the first few days of use. On further investigation, this observation was attributed to Noopept, which has been known to cause headaches upon initial consumption due to low choline levels.

But after four to five days of use, the Citicoline in Awaken Gold leveled out the effects of Noopept, and the volunteers no longer faced any issues. Other than the above, the supplement did not show any adverse side effects.

After careful consideration, we can now say with confidence that Awaken Gold is undoubtedly worth the money. It’s safe, vegetarian, and has an attractive assortment of nootropics that boost mental performance.

What’s more, it even includes Noopept, which is a rare ingredient and is reason enough to opt for the supplement. And even though you might experience mild headaches, Awaken Gold itself takes care of it after initial use.

So, get a bottle of the stuff today, and awaken yourself to a golden future!